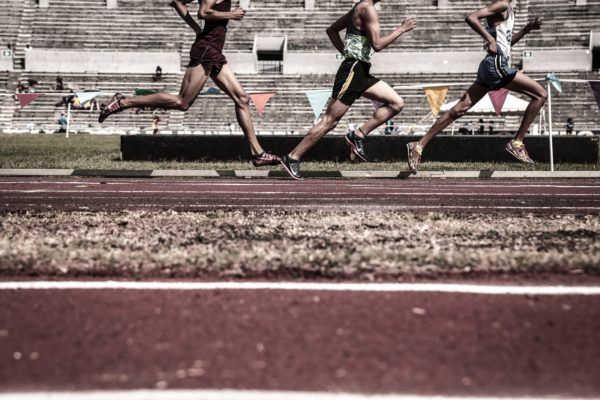 The following is an excerpt from the digital Course, Coaching the Endurance Events. Check it out here!

“What about the added body mass? Won’t this make my runners slow?”

This question highlights a legitimate concern, and has been used as justification for distance runners to not lift weights for decades.

The most simple explanation for this is that the majority of endurance athletes do not have spare protein to use on muscle building, due to the large volume of running they are doing.

More specifically, the lack of excess muscle growth is due to a series of chemical reactions (signaling pathways) in which a group of molecules work together to control cell function. Signaling pathways for endurance training (AMPK) work to increase mitochondria, and inhibit the (mTOR) pathway, which is responsible for increases in muscle strength and size.

A practical takeaway for athletes wishing to strength train while minimizing muscle gains is to try strength training first, and follow it up with easy endurance work. This format will inhibit the length of time the mTOR pathway is active (Magness, Science of Running).

Even in the longest endurance events, speed and strength are key factors in successful competitive results. Billat (2001), for example, demonstrated that marathon results in elite athletes are more related to 1000m personal best than VO2 max! The same author is also collecting evidence that the so-called 30km ‘wall’ has more to do with muscular strength endurance, rather than limits in metabolism.

Interestingly, Ivan (2012) also showed that strength tests (such the absolute static force of the thigh flexors, or distance covered for 10 bounding strides after a 300m run at high intensity) were better predictors of female elite middle distance competition performance than traditional aerobic markers – such as maximal oxygen consumption.

More generally for men and women, it is difficult to evaluate the efficiency of preparation solely by the use of metabolic parameters. Testing explosive strength has therefore been found to be an efficient monitoring tool – as it requires both high volitional and physical recruitment abilities (Bayer, 1993). The implication of this is that even endurance sport coaches should consider training high intensity components. We cannot simply just forget about speed and strength, as these are limiting factors to overall performance.

The impact of strength in endurance performance is generally higher in women. In endurance-strength sports like rowing, for example, longitudinal studies from East Germany showed over long-term progressions that the strength level in women matched the evolution of specific rowing improvements. While in men there was an increase, followed by a stabilization, the results then showed a decline in the strength-competition result relationship (Bayer, 1994). What that implies from a practical standpoint, is for men there is an optimum strength level, under and over which competitive performance is lower, while in women it is simply that the stronger they are, the better they are in competition.

According to Kots (1990), adaptation to endurance exercise in elite distance runners compared to the general population leads to a higher percentage of slow-twitch fiber (type I), and an increase of fiber size of both slow twitch and fast twitch fibers; with women having the highest growth in fast twitch (type II) fiber size. That suggests female endurance athletes rely more on strength and speed than men in their endurance training adaptation.

That being said, there is always a balance.

Strength abilities should not be overdeveloped to the detriment of other key endurance, physical, and morphological requirements.

DON’T HAVE A WEIGHT ROOM?  NO PROBLEM …

The term strength training has been used as synonymous with lifting weights in a weight room, and moving heavy barbells.

This classic form of weight training has its obvious merits, but there are many other ways to improve the strength of our athletes.

Examples of different modalities include: hill sprints, multi-jumps, medicine balls, and body weight circuits. We will briefly describe each.

When equipment is not available, hill sprints can be an invaluable method to improve the performance of our athletes.

Coaches can use the slope of the hill as the controlling variable, depending on the goal of the workout. A steeper hill will elicit longer ground contact times and a higher strength focus, while a flatter hill will be more ballistic and reactive in nature. Throughout the season, we can decrease the slope to increase specificity, and focus on producing force as quickly as possible.

In addition to sprinting up the hill, athletes can lunge, bound, hop, or jump up it.  This can be an excellent strategy to improve specific elastic endurance abilities, for example – and is another excellent alternative training method for endurance athletes who do not have access to a weight room.

The Rudiment Hop Series (RHS) can be used as an introduction to plyometric training, and is one of the more versatile training tools we have in our toolbox. Consisting of a series of low-amplitude hops, the RHS can be inserted virtually anywhere into a training program – warm-ups, supplementary work within a track session, return to play protocols, post weight-room sessions, and more.

Although the RHS lacks in some areas of specificity to upright sprinting, it allows the athlete to rehearse the sensation and intention of ground contacts in a controlled and repeatable manner. In this sense, the hops can serve as a ‘bridge’ between various stops along the spectrum of transferability.

The RHS has a place in any program aiming to prepare athletes for dynamic and explosive movements. It can serve as a starting point for more complex and intense forms of plyometric training and, due to its relative simplicity and low intensity, can be implemented year-round, virtually anywhere within the training plan.

We have written an extensive eBook on our rudiment hop series.  You can download the eBook here.

Watch our video on Rudiment here.

Because of the nature and simplicity of in-place jumps, they can also safely be used to train elastic endurance in a circuit style.  By grouping a series of different exercises together, athletes use a variety of footstrikes, and can train at multiple joint angles and contact times.

As these exercises produce high forces, the loads to the system can be very intense.  As such, technical proficiency is  key to progression.  We will often observe athletes perform these exercises on their toes.  This is a significant technical error, and will often lead to foot, shin, and knee problems.  Athletes should be encouraged to perform all horizontal bounding exercises with a flat foot contact.  Coaches should be especially aware of progressing into alternate-leg bounding drills too early in the developmental process; especially with endurance athletes, we can achieve much of the adaptations we are seeking with less complex exercises – such as the RHS and skips.

As with all jumping exercises, it is essential that technical proficiency dictate whether hurdle hops will exist in an athlete’s training program.  Often, coaches will prescribe overly high hurdles, and athletes will struggle to jump over them – tucking their knees up into the chests, and landing in a plantar-flexed position – often in front of the CoM.

Again – these are technical errors.  Coaches are encouraged to use low hurdles – appropriate to the level of the athlete(s) you are working with, and instruct athletes to land flat-footed.

Depth Landings (single and double-leg landings and hops with a hold or a pause – i.e. with no rebounds) can lead to an increase in intensity and focus on the eccentric contraction.

Overload progressions include drops from increasing heights, use of single-leg landings, and the addition of external resistance (dumbbells, weight vest, etc).  Other progressions/alternatives can include varying the angles of the knee/hip joints, repetitions and recovery times.

Medicine Ball circuits include multiple exercises using a light medicine ball as an additional load. These can include catch/throw combinations from various positions, and exercises that resemble general strength work, using the ball as a light load.

In addition, we can safely build speed strength abilities with dynamic and explosive medicine ball heaves.  The primary examples are the overhead backward heave (OHB) and underhand forward heave (UHF, or often called ‘BLF’ – between the legs, forward).  Medicine ball heaves are excellent developmental exercises, and can help to teach some of the more basic movement patterns (e.g. squat and hinge) before loading these patterns at higher intensities in the weight room.

When equipment is limited, bodyweight circuits can be extremely helpful to fill in gaps. In these general strength workouts, the athlete’s own bodyweight serves as the sole loading agent; these workouts are usually performed in circuit fashion.

It is becoming increasingly clear that strength is an important component of speed – at all events, not only in the sprints.  In fact, you would be hard-pressed to find an elite distance runner who doesn’t employ some sort of strength training in their program.

While there may have traditionally been some confusion as to the types of adaptations expected from strength training, and perhaps more specifically – how they might ‘interfere’ with the adaptations expected from more specific endurance training, coaches, strength coaches, and sport scientists generally have a better understanding of how to prescribe these abilities within a comprehensive training program

An effective strength training program – drawn from a number of various loading strategies – weights, body weight general strength, jumps, and medicine ball, for example – can positively impact the performance of even the longest of long distance events.

How a coach organizes the various strength training strategies and loading parameters throughout the training year depends highly upon the coach’s specific training philosophy, her training environment, and the specific athlete population she is working with.

For years, endurance coaches have preferred to employ repeated effort methods of strength development in their programs, but it is our assertion that most runners will gain greater strength adaptations from more dynamic and maximal efforts – as a predominance of strength endurance work can be achieved through the actual running process.

Again, the exact ratio of work through the different strength zones will depend first and foremost on the running program – but we cannot recommend enough the importance of a more balanced approach.

How a coach organizes these zones throughout the training year is also an import consideration.  Traditional linear periodized approaches – for example, strength endurance, followed by maximal strength, followed by dynamic strength – have for years been the standard in the endurance running community.  We ascribe to a more parallel approach – where all abilities are trained simultaneously; only the hierarchical organization changes, depending upon the relative importance of each ability at the time.

Either way, a coach must do their best to devise the most-appropriate combination of speed, strength, and endurance training.  Once again, this brings us back to system’s thinking — it is not the individual component-parts of this system that is the most-important, but how these component-parts interact together to solve this amazing puzzle of improving athletic performance!