Good to great: A coach’s perspective on how to achieve success in post Collegiate Track & Field. 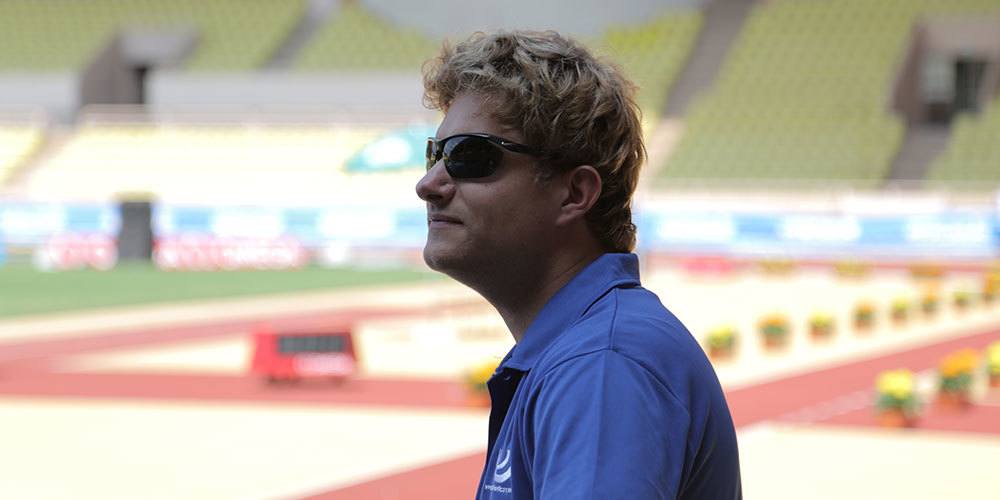 After having gained an athlete’s perspective last week on how to transition effectively to the world stage during the post Collegiate years, we decided to even up the score and seek out a coach’s standpoint on the topic…

So, we spoke to a coach who has successfully forged the path from Collegiate performance to the pinnacle of success on the global stage.

This week’s Q&A is with Andreas Behm …

A highly intelligent Coach, Behm has enjoyed outstanding success in his career so far, having coached in both Collegiate and professional settings to a truly elite level.

Andreas, thanks for joining us. What are the key factors that contribute to the ability to post successful performances at Collegiate level?

Well – particularly for Collegians, we always find that one of the most important factors is being able to adapt and adjust – so adaptability and flexibility are probably the two most important qualities there. We’ve seen highly talented people who are simply not able to be flexible and they’ve struggled mightily in College – particularly in the first two years -so I think those qualities are important.

Likewise, being able to manage the grind of the Collegiate season, where you’re having to line up week in week out is key.

Overall, being able to balance all the responsibilities you have with school, training, life – and finding that balance is really important in enabling you to be able to post good performances in College.

How does this differ from the ability to attain success at senior international level?

Well particularly in the US environment, I think College actually prepares you quite well as you often run in multiple events, get used to running rounds, and are exposed to pretty high pressure states and situations, so I think that helps a lot.

“On the International level you may be traveling by yourself, your coach may be at home at your training base, so you have to be more independent and be able to think on your feet as you go.”

So, what are the stand out characteristics of the performers who make this transition a successful one?

Well for sure it’s the ones who are most disciplined and diligent in what they do – simply because at the College level you can, to a certain extent, get away with just being very talented; but at this level, you’re running into two different types: you’re running into the complete athletic freaks – so the top of the gene pool; and then the other ones who are ridiculously dedicated and would do almost anything to be successful – they stick to their diets and train harder than anyone will train.

So you’ll run into those two types, the super athletic ones, and the one who is just crazy dedicated, and if you don’t fall into one of those two, or a combination of those two, you have to do everything right to have a shot.

Also, again, adaptability is part of it as you’re traveling by yourself, you’re exposed to different time zones, cultures, foods – all those things play a role. If you’re too rigid and inflexible in what you do and you can’t roll with those things then you’re going to have a hard time adjusting.

How do you think we can best support and educate athletes during this transition to help them bridge the gap?

Well I think for sure right now there’s a lack of support – particularly for the late blooming athlete in the sport. If you’re fast enough to get a shoe contract coming out of College, obviously you have a lot of advantages – financial advantages – you will probably be able to find a good training base for yourself and all those things.

The athletes who WE want to help are the ones who are maybe one or two years away from that high elite level and being able to get a shoe contract – helping them to find training support is key.

I think the things that go into educating them are the things we talked about – how to travel, how to train on your own, how to understand training, how to use self-recovery modalities at home and on the road. Things of that nature.

Being able to understand the nature of international competition. We’ve all been through that – we’ve made the mistakes and corrected them as we go along, so we can impart that knowledge and wisdom onto others and help them to not make the same mistakes again.

So, what from your experiences, are the greatest causes of athlete drop-out at post-Collegiate level?

Well obviously the first one is just financial; it’s very hard to sustain yourself if you don’t have a shoe contract on the next level – there’s no College scholarship anymore where you can get to train for free and get an education, so now you’re forced to scrap on your own.

Second is just trying to find a training environment – we’ve all heard the stories of people having to hop fences in order to just be able to get onto the track to train. It becomes a lot less accessible to people at this point in time.

A third one popping up is the meets at the NCAA level are becoming a lot more restrictive in terms of letting the post-Collegiate athletes participate. A lot of the meets are scored now, and it’s harder to find races consistently for people who are out of College so you’re making a tough time for an athlete to continue to do what they love and are passionate about. The struggle is real.

Many are side-lined through injury and then struggle to make the transition – what is your advice to athletes to avoid this?

I think it goes back to what we talked about earlier – just being diligent about what you do. It’s hard not having access to medical – some of the things you need aren’t necessarily covered by health insurance at all, so I don’t know if there’s exact advice.

Again, it comes down to you being structured, diligent, managing your money and resources correctly to allow you to do what you want to do. That’s a difficult process – as some of those resources are hard to access once you leave College.

What are your views on World Youth & World Junior Championships as a stepping stone to elite performance – what are the benefits and drawbacks to this?

I can’t think of many drawbacks right now. I love those in terms of developmental steps. I think again, it’s a chance to learn how to compete and learn how to run at a competitive level at your age environment, which I think is highly important. I would never recommend someone skip out World Junior Championships even if they qualify for Seniors.

I feel like it’s a really important developmental step.

What is the point of going to seniors, say as an 18 year old and getting destroyed on the Senior level; not necessarily by guys who are more talented, but guys who are simply way older, experienced and physically mature than you at that point, as opposed to going and racing against your contemporaries and being able to measure yourself against them, having a really good and positive experience?

So if the development is consistent and continuous, the World Seniors will be there as you go on.

I feel like a lot of careers have gotten destroyed by racing at World Seniors way to soon, and getting messed up by that.

Major league baseball does a good job of progressing people through their minor league system here … they have single A, double A, triple A before you reach the Major League level and I feel like that is a very good system for proceeding.

It doesn’t necessarily mean that everyone has to go through all stages for a long time. Sometimes you can move through each stage fairly quickly depending on your ability and maturity level, but I think those are important stepping stones for kids.

Of course there are coaches who are maybe too focused and burn their kids out over performance on this, but I feel like a lot of that has to do with what happens after this as well. Let’s put it this way – if managed properly I think these are great developmental meets for youth.

And lastly, what is your advice for those currently in High School who want to ensure success and a smooth transition between high school, college and senior elite?

That means if you are serious about what you want to do, you watch your nutrition, you watch your sleep habits – you don’t go out and party to an excess. I’m not saying don’t ever go out as that can be a good stress release once in a while too, but you have to manage all these elements off the track as well … if you view yourself as different, than say a non-athlete, I think it becomes a lot easier to take pride in managing those factors.

You do not have to go and race if you don’t want to – no one is going to force you to go and be a track athlete, but if you assume that labour of love for yourself, then you have to view yourself as being different and taking care of your business to ensure you are going to do well. Otherwise it’s a waste of your time and your coaches’ time as a whole.

As a High Schooler, keep your grades up. This allows you to continue your development on the collegiate level. College provides you the opportunity and resources to further your development and attain an education, which will serve you well later in life. Particularly in the US most professional track athletes emerged from the college ranks. The NCAA allowed for sustained athletic growth as well as exposure on a national level on some pretty big and competitive stages.

And again, as a third point, I think it just comes back to being flexible and adaptable, and being able to grow into different situations as you go along. You may have some things handed to you, but a lot of times you have to work for what you want, and again the best people are those who are able to adapt to a new environment and understand constructive criticism from coaching and not just hold on to old preconceived notions of training and other support areas that surround their sport.