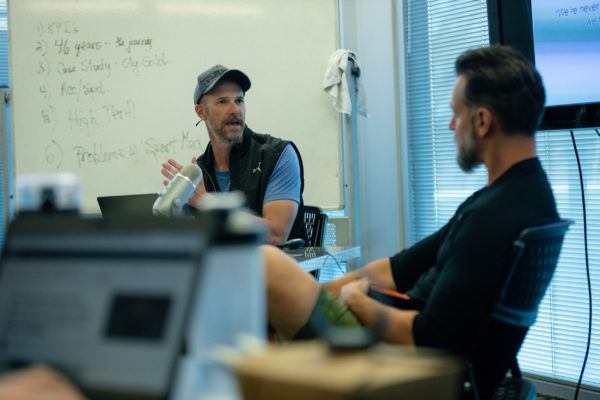 As I previously wrote, the embrace the suck concept first resonated with me a few years back.

To bring a little suckiness into my life, I resolved to do something that sucked every day.  I generally stuck to physical things – but this also included more psychologically challenging things as well (such as reading articles, books, etc. that went against my own ways of thinking – which I still do today; I think its really important to get outside of our bubbles).

The primary physical challenge became the 100×100 – where I deadlifted 100k 100 times as fast as possible (trap-bar / high handle).  If you have done this, you know that it really sucks.  I did it weekly for a few months – and it kinda caught on, with friends and colleagues helping to spread the word, and 100s of people all over the world challenging themselves.

My good buddy, John Berardi, gave it a go – and spent the next week on the couch.

And by the way – the fastest I have personally heard about is from strength coach Nic Simpson in Calgary, who finished in 2:50! (My goal was to go sub-5 minutes, but I topped out at 5:30 something).

Anyways – lately, I have found myself drifting back into avoiding challenging things – I don’t know if it has anything to do with the more systemic Covid challenge, but I have been finding that I get pulled towards comfort easier than I have been in a long time.

So back in November, I began to think of bringing back the #EmbracetheSuck.

A few months prior, I had gotten back into running a little bit (I had ran a lot in my teens and early 20s, but really not at all since then – so it wasn’t easy for me).

Long story short, I decided to add running to the# EmbraceTheSuck program, and rather than doing it weekly, I figured I’d go all-in, and do it daily.  I then added push-ups, just so it would be more-rounded, and then I began spreading the word a little – if you tell people what you are going to do, there is a greater chance you will actually follow through with it.

If you want to get involved – don’t feel you need to do exactly this though.

When we last did the 100×100, the women’s weight was 80k.  So that is an option.  This is also a pretty heavy weight for light women, so if you want to adjust downwards – go right ahead!

Pick something – it doesn’t haven’t to be what we are doing.

For example, Chris Miller – US Ski & Snowboard S&C Coach will be doing the deadlifts and the push-ups, but isn’t confident his body will hold up to daily 5 mile runs, so will actually be alternating between a 5 mile run and 500m of sled pulls at 100% BW.

Classroom Champions Community Manager, “small and wiry” ultra-marathoner Katherine ‘KP’ Peterson will have no problem with the running and push-ups, but will be substituting in 80lb dumbbell deadlifts for 100 reps, and adding some more mileage (she is committing to a minimum off 50 miles/week!).

The point is simply to pick something that kinda sucks.

Pick something that creates a level of friction between intention and action – then work through it, consistently.

The more we take action, the less the friction

Tomorrow, I will share with you something that will help us to keep going, and how you can get involved!