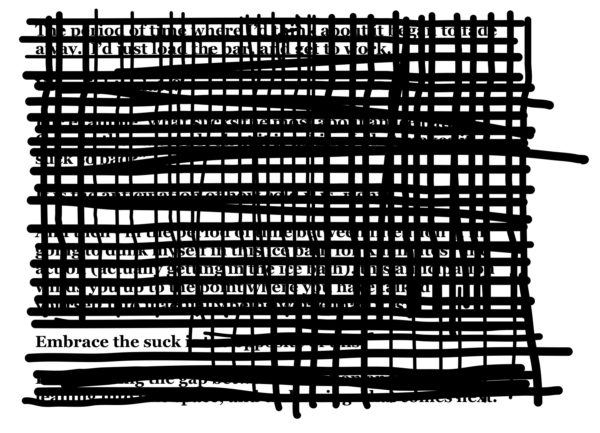 The first person I heard say this was David Goggins a few years back.

Goggins’ slogan is rooted in the assertion that we are – generally – pretty soft.  As soon as something becomes overly challenging, we stop – we find a way not to do it, or an easier way to do it.  We impose limits on ourselves as soon as something becomes uncomfortable.  Embracing the Suck means that we break through our limits – unafraid to do the hard things – the tedious things – the things that might, well – suck.

The term has its genesis in the military – perhaps popularized during Iraqi Operation Freedom, as a phrase that simply meant “yes – this might suck, but what is the alternative?”  The Armed Forces have no other choice – the only way to get through some of the tedium of war is often to embrace it – not by denying or ignoring it.

And we can learn from this.

Rather than stopping when things become uncomfortable – we can instead search for opportunities to lean into this discomfort.  To seek out things that suck a little bit – that take us out of our comfort zone.

For example, the first time I heard about ‘Embrace the Suck’, I challenged myself to do something every day that I didn’t like (including a daily 12 minute ice bath).  And every week, I’d challenge myself with a physical task that REALLY sucks: trap-bar deadlift 100 repetitions at 100k as fast as I could.

This sucked – a lot.

I hated every minute of it – and dreaded getting up each Friday morning – knowing that today was a 100×100 day.

This dread continued until the end of the 1st or 2nd set.  The rest of it, while not actually ‘fun’ at all, was not so bad!

By leaning into it, I began to enjoy the pain of it a little!

And the more I did this, the less it sucked (duh!).

The period of time where I’d think about it began to fade away.  I’d just load the bar, and get to work.

For example, what sucks the most about an ice bath?

Or – another way to look at it is asking “what makes it suck so bad?”

It is the anticipation of how cold it is, right?

And then – in the period of time between intention (I’m going to dunk myself in this ice bath for X minutes) and action (actually getting into the ice bath), this anticipation winds you up to the point where you have talked yourself into it actually being worse than it is!

Embracing the suck is the opposite of this.

Embracing the suck means we work to reduce the gap between intention and action – leaning into this space, and embracing what comes next.

I’ll expand on this tomorrow – stay tuned, as I’m going to announce what the 2021 Embrace the Suck Challenge is – as well as a few things we are adding to it.

PS — I sent a draft of this post to my buddy JB, and we are similar as to our general thoughts about motivating people by telling them they suck – or that they are soft (it’s not a good idea).

JB talks about the difference between ‘awfulness-based coaching’ and ‘awesomeness-based coaching’ – where rather than focusing on what we are bad at, we should focus more on what we are good at.  I talk a lot about how this relates to how we program athletes as well.  I feel that folks generally tend to spend excessive time trying to improve weaknesses, when we really should spend our energies on stuff the athletes are great at – their ‘unique abilities’.

Telling people they are too soft, and that they need to toughen up, is not a great example of ‘awesomeness-based coaching’, is it?

Telling people they are great – and working at the things that make them great is!

So take this post-script as a caveat of sorts: I’m with JB 100%, but I stand by what I wrote as well!

While I have tremendous respect for his physical accomplishments, I personally have no time for Goggins’ schtick. There are tons of folks that like to be called a loser; I mean there are well-known coaches who made a career out of it.

It’s just not my bag.

But I also know that I tend to bias towards what is most-comfortable; if I don’t stay busy, I get lazy.  I get drawn towards what I am currently doing the most of.  And if that is a bunch of easy stuff – then I find myself doing more easy stuff.

It is reflexive, and there is only one logical conclusion to this.

So I find that I have to purposefully – intentionally – carve out the space and time for things that stretch me, and I find that one way to do this is to periodically – like a super-hard training cycle, for example – push myself past what I think is the very edge of my adaptive reserves.

As I said – I will expand upon this tomorrow, with reference to a concept I only recently heard about that really resonates with me.

Come back to find out more