Jumping: A Skill and A Science 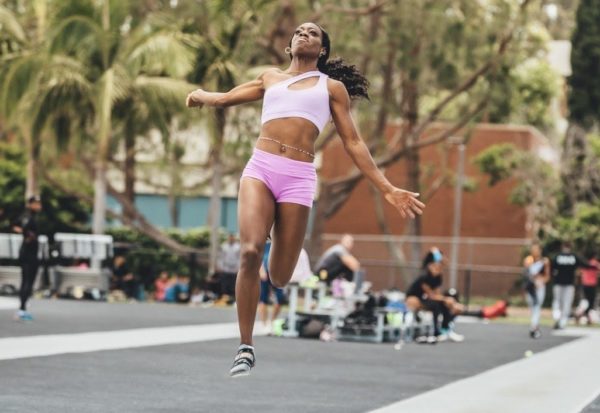 Current ALTIS Apprentice, Mohammad Nourani, drew from his experiences competing and working in multiple sports to put together this comprehensive resource on various jumps. This article will examine the basics of jump biomechanics, as well as compare and contrast jumps in separate sports, to show commonalities.  Enjoy!

Despite the purpose, intent, and outcomes of jumps across various sports being different, the mechanics and technique from all types of jumps have more similarities than differences. Understanding the correlations between jumps can lead to better skill acquisition, refinement and coaching cues, while also opening the door to draw parallels in training.

Jumping Is A Skill

In the majority of my team sport experiences, both as a player and coach, I have not noticed much emphasis placed on the skill of jumping. Skills practices understandably spend time focusing on more technical requirements for any given sport: shooting a basketball, catching footballs/baseballs, soccer footwork, etc. Most athletes are expected to self-organize their way into jumping out of necessity, as the case can be with running.

Many team sport coaches today, especially in field sports, are starting to come around on the importance of sprinting as a skill. They are recognizing large populations of athletes who present inefficient movement patterns that, at a minimum, decrease performance, or worse, lead to injuries. Why shouldn’t the same hold true for jumping? In fact, what even is running if not a series of connected jumps? If more coaches dedicate time to teaching the proper positions, feelings, and flow in jumps, athlete development and performance can be better maximized.

Although there is something to be said about having athletes “figure it out on their own,” technique is necessary to set an athlete up for long term success. Setting the foundation will also reduce the likelihood of the athlete forming bad habits. We have seen the evidence: going back to sprinting for example, why do those “speed camps” with track coaches prior to NFL combines work so well at lowering the 40 yard dash times of athletes who are already at an elite level? A big reason is that they have been sprinting inefficiently up to that point in their development, but are finally learning correct technique and its application is yielding fantastic results.

What All Jumps Have In Common

Before we get into the breakdowns, it is key to first understand the biomechanics of jumping. Dynamic or static, off of one foot or both feet, every kind of jump contains three key muscle and joint actions. This process is called the stretch-shortening cycle.

These phases have been well studied and manipulated in training, especially as it relates to strength & plyometrics, for many years. They are also omnipresent in practically every action that takes place in sports and everyday life, as our skeletal muscles lengthen, amortize, and shorten with movement.

Furthermore, there are some key technical aspects to every jump that flow alongside the biomechanical actions. The way that they are carried out can be interpreted as key performance indicators for distinct types of jumps. Later in the breakdowns, I will reference these elements a lot. Obviously, a specific jump can be broken down much further based on the sport or event, but these are some of the overall key occurrences in jumping.

Still with me? Let’s get to the good stuff.

I should clarify the section title here and say these jumps really mean one-foot takeoffs. Generally, one-foot takeoffs are performed when faster speeds are generated in approach acceleration, because it would be difficult and/or inefficient for an athlete to slow down and gain enough body control to jump off of both feet. If you don’t believe me, try sprinting at full speed then jumping off of two feet without slowing down.

All jumping events in track & field (high jump, long jump, triple jump) are done using single leg takeoffs, again utilizing speed and momentum to their advantage. Even though there is a place in many team sports for bilateral (two leg) movements, a significant amount of sport actions, jumping included, happen unilaterally. Due to the higher speeds, one-foot jumps are often used in team sports when the athlete needs to cover horizontal distance, usually in combination with vertical height.

Other common single leg jumping actions in sports include high speed leaping or diving actions, in numerous sports like softball/baseball, football, soccer, and figure skating. Most stationary jumps are performed bilaterally, yet there are instances where single leg takeoffs are used, such as with flying kicks in combat sports.

Now, taking the points discussed in the one-foot jumps, we can draw many parallels in two-foot jumps. In real time, it is much easier to point out how different two-foot jumps look. But the vast majority of what takes place still remains the same.

Though not a lot of sport actions happen from a standstill, generally when athletes do not have either time or space to build a large amount of momentum, they will opt for a two-foot jump. Some acceleration, however, is still required to execute a maximal two-foot approach jump, but the speeds are slower than a full run up for a single leg takeoff. You will often see two-foot jumpers have shorter approaches than one-foot jumpers, and it is not uncommon for two-foot jumping athletes to slow down mid-play, and then briefly re-accelerate prior to jumping. As I noted before, this is done because more overall body control is needed for two-foot jumps compared to one-foot.

Unfortunately, we as humans cannot build vertical momentum prior to a jump. Acceleration occurs horizontally and then we try to transfer the energy into a vertical direction. The extra control in a two-foot approach jump also helps athletes with the vertical expression of the jump, as the momentum built in horizontal acceleration can be more easily directed into vertical force vectors when using both feet. Not saying it leads to a higher overall jump, but when athletes are constrained by space (e.g. they can’t afford to travel too far forward), two-foot jumping comes in handy.

**Side Note: You know what I said about jump technique not being emphasized in team sports? The exception I’ve seen in my experience is in volleyball, where it is taught quite well overall. Because the approach jump is such an integral part of volleyball hitting and serving actions, it is actually emphasized greatly among younger or still developing athletes, and continuously reiterated over the duration of an athlete’s career. In my biased opinion that’s why the greatest two-foot jumpers in the world are volleyball players. **

Although I am, in a sense, arguing that “a jump is a jump,” context is still incredibly important. As I mentioned, the differences in jumps come mainly from motivation, purpose, and the details involved with the sport/event. In sports like basketball, volleyball or soccer, there are so many external variables for an athlete to consider: the ball, court/field location, speed, spacing, opponents, rules, etc. As a result, oftentimes they are not thinking about executing their jump at all. It ends up being more instinctual.

When the jump itself is the goal, like in track & field, you might think that it gets easier, because all the athlete has to do is focus on the jump. While that can be true, the pitfall here is ‘paralysis by over analysis.’ The pressure of perfect technical execution, especially in competition, can be overwhelming. So it could be a blessing to have enough distractions to allow the athlete to just jump.

For this very reason, ingraining proper jumping mechanics becomes even more imperative for performance, because an athlete will likely not be focusing on them mid-competition. At that point, either efficient/safe patterns that have become second nature will be displayed, or bad habits will.

Remember, the goal in performance for coaches and athletes is to not only reach highly skilled execution, but ideally to do so in an unconscious, automatic state.

The answer depends on a lot of things, namely the sport, situation, and the athlete. Obviously you cannot perform long or triple jumps in track & field off of two feet, but in a lot of sports athletes have the freedom to perform either style of jump.

From a muscular perspective, all varieties of jumps require recruitment of the posterior chain (e.g. glutes, hamstrings, calves, etc) and also anterior chain (quads, hip flexors, etc). The type of jump being performed, however, can have an influence on how much contribution comes from each. One-foot jumps tend to rely more on the posterior chain than two-foot jumps, due to the block foot being much further in front of the COM, as well as greater horizontal acceleration during the approach. In contrast, the more upright and stacked position of the body through takeoff of a two-foot jump allows for increased anterior chain involvement.

Nevertheless, the most common fallacy in jumping, especially for height, is that you can arbitrarily jump higher using one style or the other

A 1996 study showed that overall jump height and reach did not change for one-foot vs two-foot approach jumps [2]. As Figures 2 and 3 show, the main differences were in the height of the COM at takeoff, and the flight height. While a single leg cannot produce as much force as two, the additional height at takeoff plus the extra limb momentum seems to make up the difference [3].

It is important to note that this study was done with moderately trained individuals, and its relevance would lean closer to general populations than it would to highly trained individuals. Athletes adapt to their environments, and can prefer one-foot or two-foot jumps for height/distance. Sports that require more single leg than double leg jumping, or vice versa, exacerbate this preference in skill learning for an athlete.

For example, basketball players typically show good single leg jumping skill because many significant actions such as layups/dunks require single leg takeoffs. On the other hand, they may lack the biomechanical skill to perform a double leg jump just as high as their single leg.

Conversely, athletes from sports that do not have speed jumps or single leg takeoffs may have great standing or two-foot approach verticals, but lack the strength and the aforementioned “stiffness” to perform a single leg jump with much less ground contact time, and achieve the same height.

Even a long jumper or high jumper, who has always taken off with their left leg, will not be able to produce the same event results with their right leg. Is that because they are weaker on the right side? Maybe slightly, but it has more to do with the fact that the skill and coordination is lacking in jumps with their non-preferred leg.

To the naked eye every jump can look different, particularly in non-alike sports, but the biomechanics that take place in all jumps are more related than they are not. Jumping, like sprinting, is an underappreciated skill. To train the holistic athlete, the best bet is to include sports, events, and training exercises that develop both one-foot and two-foot jumping abilities. In doing so, because of the vast carryover between jumps, a proper foundation of skill, strength, and coordination is set. This in turn is key to successful long term development, and overall athleticism.

A great place to safely start athletes jumping is with low level, extensive plyometrics. This will build tissue quality, and introduce the coordination and timing necessary for jumping movements. From there you can gradually progress to more complex and intense movements, such as depth jumps. Ultimately, the best way to get better at jumping is: by jumping. And this will of course include the max-intent jumping within a sport.