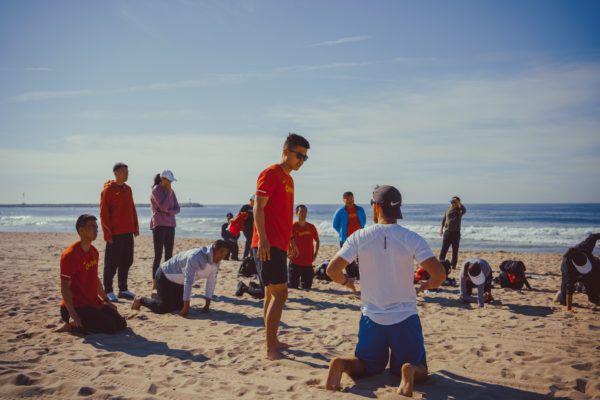 As part of our continued partnership with the Chinese Athletics Association our Strength & Power Coach Jason Hettler has joined their National Sprint Team to aid in the preparation for the Tokyo Olympic Games. Continue reading to hear about Jason’s experiences thus far.

There’s something vastly different about an Olympic year in Track and Field.

But who am I to say?

This is only my second Olympic season working in Track and Field, although in my mind, the difference is undeniable. From excitement, to stress, to panic, and hopefully back to excitement, non-Olympic seasons just do not compare.

For me personally, this season is very different as well. I am writing these reflections from Venice, California. I arrived here at the beginning of December 2019 to begin a 9 month contract with the Chinese Athletics Association working as the Strength & Conditioning Coach for the National Sprint Team through the Tokyo Olympic Games.

After spending the last 5 years in Phoenix this seemed like a tremendous opportunity to gain exposure to a new environment, challenge myself in a unique way, and travel to some new places.

At this time I am 8 weeks into the contract and am very pleased with the circumstances and my decision to temporarily leave the comforts of Phoenix (I will be returning to ALTIS at the conclusion of the season). I sold or packed nearly all of my belongings and arrived in Marina Del Rey to an unfurnished apartment (which I was expecting to be furnished). It was all a bit stressful at times, but there’s nothing I would do differently (other than bring more of my stuff to California!).

With the Chinese athletes and coaches arriving in California a few weeks prior to me – it was hit the ground running, and I wouldn’t have had it any other way. The group of 10 athletes are here training under Coach John Smith (another aspect of my decision to take the contract – an opportunity to learn from another one of the most successful Track and Field coaches around).

This meant getting to know the programming of Coach Smith as well as the individual athletes that make up the group as quickly as possible. Fortunately, Coach Smith and his assistants were extremely welcoming and helpful, as was my assistant Cao Qing Bo.

A couple of surprises early on came from the age range of the athlete population (16-28 years old) and their talent levels (10.17 – 10.69 in the 100m) as well as the facility access. Half of our sessions initially were executed with no equipment and the other half take place in a Crossfit gym, which isn’t quite equipped like the EXOS facility I had grown accustomed to.

Together, this all helped me to realize how privileged (I think) I was to have started with a group such as ALTIS and their talented athletes and world-class facilities.

With ALTIS, I have had some previous exposure to Chinese athletes over the last couple of years, which helped in my decision to join to team and gave me an idea of what to expect.

I anticipated motivated athletes that were grateful and respectful………………….…………Check.

I anticipated a burning desire for everything to be done at 100% intensity……………….Check.

But there were certainly some things I had not anticipated. Namely, the lack of posterior chain strength (and subsequent Quad dominance) as well as very different ideas around nutrition and recovery.

Increasing the strength of the posterior chain hasn’t been an issue – it was something we targeted immediately with a decrease in the frequency of Back Squats and a healthy dose of Nordics, RDLs, and Hip Thrusts among others.

The evolution of nutrition and recovery (namely, passive recovery) has been a bit slower. Partly since I did not want to come into this environment making too many changes early on. I felt it appropriate to take some time to better understand the situation. But also, as regrettable as it may be, I simply was not sure how to approach it or how they would respond.

With the help of my assistant and translator, we developed single page documents highlighting some basic nutritional and recovery strategies for the group. This alone was not enough to elicit much change but combined with consistent reminders over the last few weeks, as well as a few occasions of me expressing great displeasure with the amount of chocolate, ice cream, and cola consumed, appears to have at least gotten the group thinking about the choices they are making and asking more questions.

I have no true evidence of this but it seemed (or seems) to greatly hinder their ability to have efficient ground contacts during sprinting. Combine this with a tendency to over-push already and we see a compromised height of the CoM and decreased front-side mechanics.

Both the passive and active recovery of the group has gotten much better over the last few weeks. I think some of this has to do purely with the increase in intensity of the on-track training but nonetheless it has moved in the right direction and at a very appropriate time.

I have tweaked, adjusted, and downright changed the strength programming on numerous occasions as I continually uncover more and more information about the group and the training philosophy of Coach Smith. This is my preferred method of action anyways but at times it seems it would be nice to have a neat and orderly plan laid out with logical progressions and variation. Maybe. Maybe someday. Maybe not.

In general, we strength train two days a week (supplemented with one or two days of general strength using either bodyweight movements or the apartment complex gym).

For the main strength sessions, I have utilized supersets more than ever. Partly in an attempt to maximize the time we have in the gym and partly to ensure the athletes feel they are working hard (something I feel is very important within this particular environment).

The first session, on Tuesday, has consisted of a bilateral focus and has included clean variations, and a compound movement such as squat or hip thrust.

For the second session of the week we have been using Tendo to track velocity on a Clean-Grip Snatch and then shifted to a more unilateral focus with movements such as step-ups and reverse lunges.

Upper-body and core exercises have been sprinkled in along with some accessory and posterior chain work.

The younger athletes have been doing less intensity and more volume and the exercise selection has gradually become more individualized over time.

The main lifts have progressed from reps of 5-6 down to doubles and triples. With percentages going from 70% and progressing to 95% for the older and more technically sound.

Moving forward I will be using Tuesday mainly for Dynamic Effort and Upper Body movements and leaving the Friday session for Max Strength Development.

I have thoroughly enjoyed this experience.

The people. The challenges. The food and language. The new city.

It has been remarkable in so many ways. My chopstick skills have improved dramatically. Amongst other things I have eaten ox-tail, chicken feet and fungus.

I am currently enrolled in a free online course through Peking University to learn the language which has been a slow progression but an enjoyable endeavor nonetheless. I’ve always known I didn’t have a great ear but being immersed into a tonal language certainly highlights that.

Overall the group is adapting well to the training and moving better. It has been great to see the progress made thus far and there is a lot of excitement as we near the competitive season.

With the recent outbreak of the Coronavirus (originating in central China) we are unsure what the next couple of months will look like. More Chinese athletes and their coaches were meant to join us in Los Angeles in the middle of March to practice relay exchanges and participate in some competitions but restrictions on travel may change those plans. At the moment we are scheduled to leave for Beijing at the end of April but for the time being we will simply continue to prepare for Tokyo 2020!