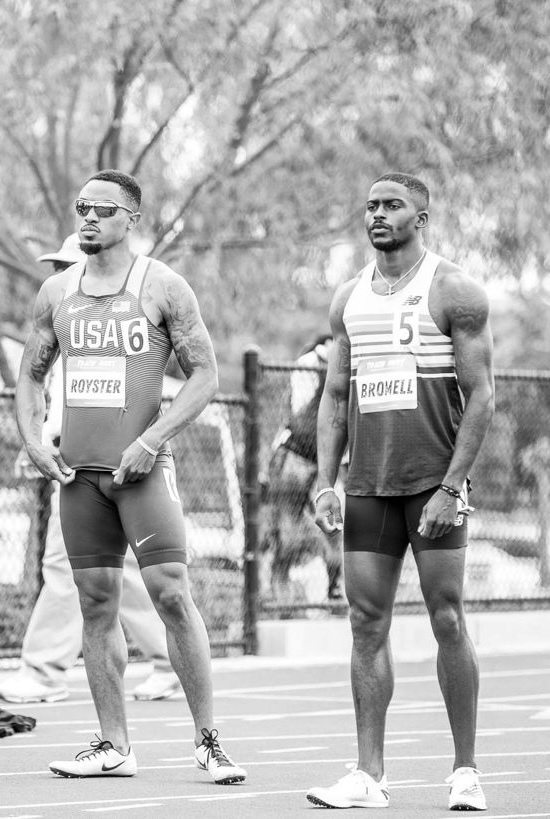 This short post is meant to accompany a two-part article I wrote for SportSmith HQ – where I updated my thoughts on my push-pull categorization.

In sport, we use categories all the time: through placing things into categories (‘categorization’), we are better able to recognize, differentiate, and understand the complex systems we interact with.

A number of categorization systems already exist at the intersection of the sprinting and sport science communities.

One example that has gained traction in the sprinting and strength & conditioning communities over the last few years is the ‘force-velocity profiling’ system of JB Morin and Pierre Samozino, which attempts to identify whether an athlete is force- or velocity-deficient during a given movement (e.g. vertical jump or a sprint).  A coach can then tailor the training program subject to the athlete’s specific force-velocity profile.

The authors conclude that such methods may “provide information as to the specific sprint-acceleration motion and as to what underlying physical or technical feature(s) mainly limit each individual’s sprint performance.”

In addition, Finnish biomechanist Aki Salo has outlined the kinematic differences in elite sprinters, by categorizing them into stride-length reliant or stride-frequency reliant. (it’s important to clarify here that ‘stride-frequency reliance’ does not necessarily mean the stride frequency is high, per se; rather, the sprinter tends to achieve higher sprint performance when the stride frequency is higher – and the same for ‘stride-length reliance’).

It is important to remember here that few of these categorizations are explicitly binary choices: it’s not this or that – rather, it’s what an athlete is predisposed towards.

For example, Salo’s research revealed that “there is a large variation of performance patterns among the elite athletes. There were clearly athletes at the highest elite level of 100m sprinting who were SL reliant, whereas only [one] athlete was clearly SF reliant. All other athletes did not have clear reliance on either side.”

That said, there are clear conclusions, and recommendations that can be made from such categorization, as proffered by Salo: “it is proposed that the SF-reliant athletes are required to concentrate on neural activation in their final preparations for the major races and have a nervous system ready such that they can produce the quick turnover of the legs. On the other hand, the SL-reliant athletes need to keep their strength levels up throughout the season and have the required flexibility in the hip area to produce long steps.”

The authors found that players could be categorized into four clusters, characterized by a range of technical features – step length, step rate, contact time and flight time (and the ratios between them – length/rate and contact/flight ratios).

“The initial sprint acceleration strategies were achieved through significant differences in a range of linear and angular kinematics between clusters, whilst several strength-based characteristics also differed significantly between clusters.”

The authors concluded that the development of such a categorization strategy may provide an effective solution for monitoring changes in acceleration technique in response to coaching intervention.

In 2019, Gareth Sandford and Trent Stellingwerff wrote an excellent paper called “Question Your Categories”: the Misunderstood Complexity of Middle-Distance Running Profiles With Implications for Research Methods and Application, within which they discuss elite athlete data showing the large diversity of 800 and 1,500m athlete profiles.

Simialry, sprint coaches for years have described both 200m and 400m sprinters as having sub-groups (‘sprint-type’ versus ‘endurance-type’, for example), and have used this categorization to better prescribe their training programs.

Getting back to biomechanics — a recent comprehensive review of commonly measured running parameters by Van Oeveren et al., 2021, showed that “the full spectrum of running styles can be described by only two parameters, namely the step frequency and the duty factor (the ratio of stance time and stride time) as assessed at a given speed.” 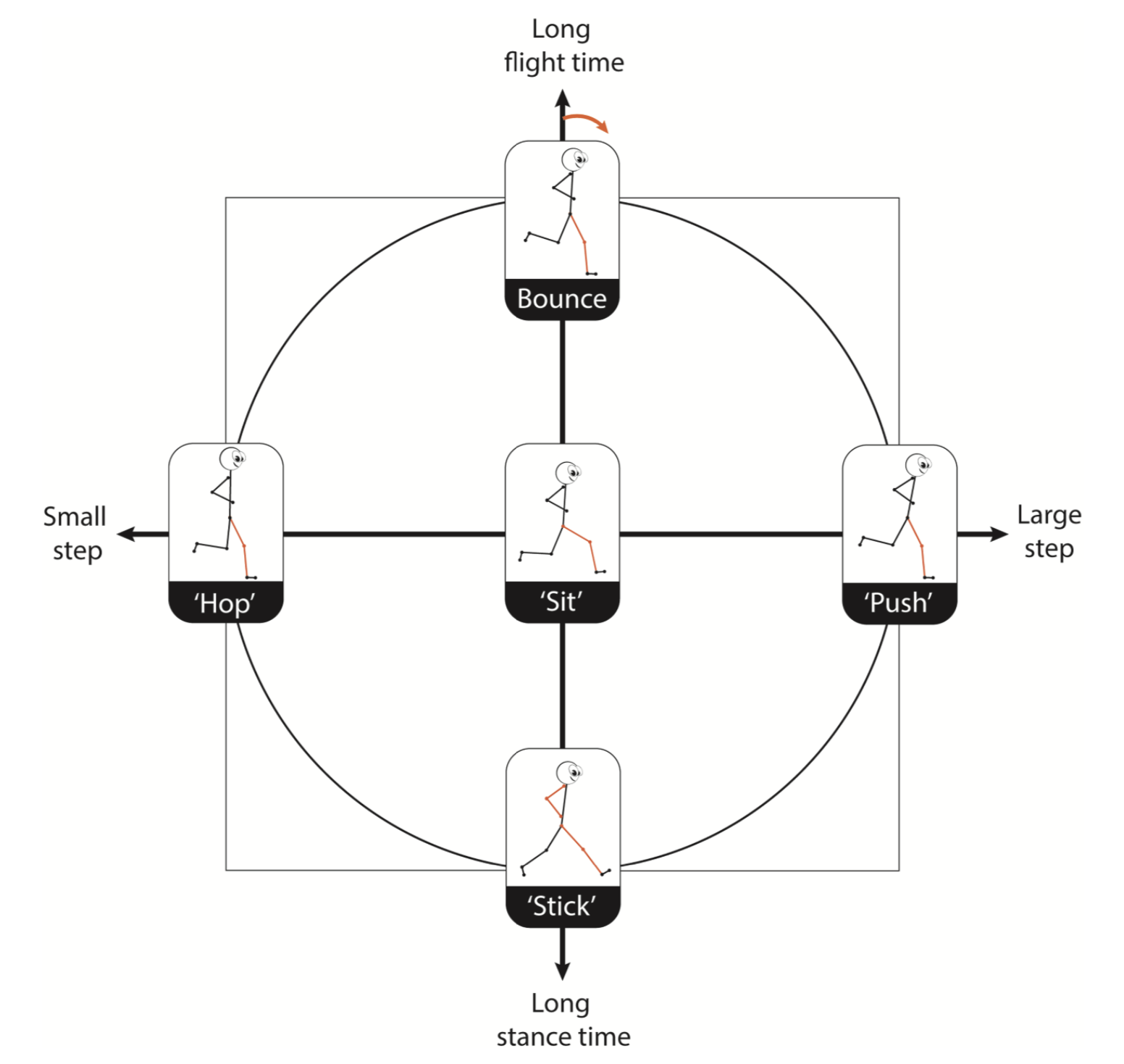 As visualized in Figure 1, the authors’ categorization, proposed as the ‘dual-axis framework’, is defined by stride frequency (corrected for leg length) on the horizontal axis and the ratio between stance and flight time on the vertical axis (quantified by the duty factor).

The authors used these key parameters to conceptualize their framework, where they categorized different running styles, as ‘Stick’, ‘Bounce’, ‘Push’, ‘Hop’, and ‘Sit’.

Another addition to the categorization research has been the work of Thibault Lussiana and Cyrille Gindre who, in their studies of recreational male runners, validated the Volodalen® method – a subjective assessment which provides a model for classifying running patterns into 2 categories, “one that relies more on the ability to propel the body forward rather than upward, and another that relies more on the ability to store and release elastic energy.”

This work provides a roadmap for others interested in evaluating subjective categorization, which is something we are actually in the process of doing with the push-pull categorization.

In the meantime, however, we need to ensure that any categorization that we do undertake is accurate – because if it is not, we can do more harm than good.

As I have already mentioned, categorizing – and subsequent labeling of – an athlete to their relative dominance helps us understand each athlete as an individual – but only if the categorization is correct in the first place!

When we refer to a dog, the category we use differentiates the dog from all other four-legged furry things: we know it is a dog, so we act in ways that are appropriate to act around a dog.  But if we mistakenly categorize a wolf as a dog, and go to pet it, the consequences could be disastrous — just as it might if we mislabeled a doberman as a golden retriever.

Similarly, if – through FV profiling, for example – we mistakenly categorize a velocity-deficient athlete as force-deficient, and prescribe and organize our training based upon the assumptions and recommendations made through this erroneous categorization, we will most-likely be inhibiting the athlete’s development.

We would have prioritized the wrong things!

So we have to be accurate – both in description and implementation.

Whenever we ascribe a particular label to something, we have to be careful that we don’t allow the label to define the system as a whole – our models must conform to reality, not vice versa.

This is why the reliability and validity present in the force-velocity, length-rate, aerial-terrestrial, and flight-contact categorizations is so important.

The same cannot be said of push-pull – and thus, we need to be deliberate with how we go about categorizing.

And I’m not sure we have been — thus this update!

Part 1 of this post is on Sportsmith HQ. Give it a read, and let me know what you think. Part 2 will be out next week.