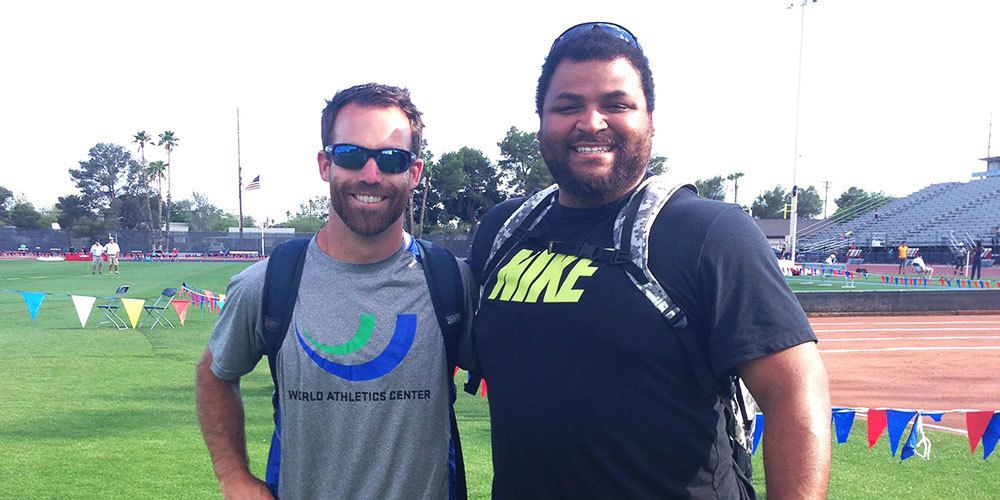 A former collegiate thrower who has coached in facilities from Iowa to Wales – Coach Sheuerman has a colourful background and a story to tell. As Assistant Throws Coach at Altis, Nick is tasked with coaching the Semi Professional and Scholarship throwers, as well as being heavily involved in directing and organizing the Apprentice Coach Program and newly created Intern Program. Having witnessed first-hand the growth of Altis from its inception to where it stands today, there is none better qualified than Nick to reflect on the dynamic evolution of the Center so far: We asked him to share his perspectives on working at Altis, tell us about his philosophies, and share his key tips for athletes dreaming of making Track and Field their profession.

Nick – thanks for joining us – as always, we like to start by getting some insights into the background of our interviewees, so could you tell us about your experiences as a student, athlete and coach?

After playing many sports as a child, I decided to stick with Football and Track and Field. Despite being as a very small (5’9’’ 160lb) lineman and discus thrower/shot putter I was a naturally aggressive athlete, so I felt these pursuits suited me best regardless of my relatively small stature. I decided to drop football because I thought there was too much running and I wanted to focus on a track scholarship. I ended up throwing at University California Santa Barbara where I threw ok for a little guy (Disc 47.50, Hammer 51.50). My relatively small stature in “big guy” sports ultimately served me well as a coach because I became very aware of technical proficiency and body awareness. I could not rely on size to get the job done, so the only way I could beat big guys was to be more technically proficient and outwork them.

I began coaching local high school throwers while getting my Exercise Science and Coaching degrees at UCSB. I happened to get lucky and work with an athlete named Nick Scarvelis who ended up being a state champ in the Shot-put. I think that experience gave me the confidence to pursue a coaching career that eventually led me to Iowa State University as a Graduate Assistant and Wales to work with Welsh Athletics while getting my MBA. I owe a lot to former coach and mentor John Dagata who supported my desire to coach and provided me with opportunities at Iowa State and Welsh Athletics. While I was in Wales I was able to get an MBA, and was lucky enough that my supervisors allowed me to study a less “traditional” subject that incorporated my passion for both sport and Business: ‘Transitional Barriers of Student Athletes from Collegiate Athletics to the Workforce.’

So on your return to the USA where did you work prior to joining Altis?

When I came back to the Bay Area from the UK, I worked for a marketing research firm. While I enjoyed interviewing high level executives … I quickly decided it was not the career path I wanted to pursue. I began volunteering with high school athletes in an effort to keep my sanity and start making coaching connections. It was through my former high school coach Roberta Chisam that I was connected with what was known at the time as the World Throws Center.

When and how did you start working at the Altis?

This is a cool story. I started working with Altis when it was still the World Throws Center in 2012. I vividly remember my former high school coach mentioning casually, “I hear John Godina is looking for help with his World Throws Center… if you are interested in coaching this may be a good opportunity” Keep in mind, this is one of the most decorated throwers in US history. I emulated him as a thrower, I had posters of him in my room … he was a significant source of inspiration as a young athlete. Needless to say, I sent him a humble email asking him if he needed my help. When I received a call from him a few days later, it was not a hard decision to take an hour away from work to talk with him about his plans and how I could be involved. So – when the person you have looked up to throughout your throwing career tells you to get on a plane and come visit, you are very excited to get on that plane. We discussed his plans to create the Altis in Arizona which he envisioned would become a world leading resource for track and field coaches and athletes alike. Early ideas initially involved a Semi Truck cruising around the country with a mobile throwing/strength setup in tow … It is always a go big or go home mentality with John, which I thought was pretty cool!

Needless to say I was hooked from that point on and it has been a sincere privilege watching his vision continue unfolding into reality.

Great story! So delving deeper into your coaching experiences – who have been, or currently are your key mentors, and how have they influenced you?

I would not say I have “key” mentors. Many coaches/friends/colleagues have influenced my development. From a young age, both my high school coach Roberta Chisam as well as my high school mentor Nick Garcia had a profound impact on my development. They encouraged me a great deal and were both up front with me about the level of commitment it would take for me to be a successful thrower. I had two collegiate coaches – John Dagata and Keith Baker whose impact on me as an athlete and coach cannot be understated. Altis is a place of mentorship and development for coaches and athletes alike. I would not be the coach I am today without the direct influence and guidance of our entire coaching staff.

So, following on from those experiences, tell us about your coaching philosophy – has been influenced by you working at Altis?

My coaching philosophy is simple. I believe that there are ‘many roads to Rome’ so to speak, and that coaching should focus on the individual and dynamic nature of each athlete/person. From a throws perspective, there are important performance indicators to work towards from a strength and power perspective. What makes one coach more effective than another is largely based on the ability to come up with a plan that utilizes athlete’s unique strengths, while minimizing inefficiency. Complementing the more general indicators of performance with unique
indicators of each athlete is the art of coaching I seek to continually improve.

“My coaching philosophy is simple. I believe that there are ‘many roads to Rome’ … and that coaching should focus on the individual and dynamic nature of each athlete/person”

My coaching philosophy has been largely formed by Altis, I don’t think I had much sophistication prior to coming here. Most definitely a testament to the lead coaching staff and their willingness to mentor.

Some insightful reflections Nick … so moving onto life at Altis – can you tell us about some of the guest coaches that have attended Altis programs – what have been some highlights for you and what have you taken away from meeting these people?

There have been so many guest coaches in my time here, I could not highlight just a few of them. There is a tremendous flow of information and experience throughout Altis and our extended coaching network. It has been a true blessing to be a part of open information exchange with coaches from around the world, and I have learned a tremendous amount from all of them.

A great position to be in! So a question now for those athletes dreaming of senior success – what would be your advice for high school age athletes that want to make to the post collegiate level as a successful athlete?

I don’t think I would have been even a mediocre athlete let alone a good one without the help of many mentors along the way. Find someone who has had long term success as a coach or athlete and learn as much as you can from them. The people we choose to surround ourselves with and learn from often shape our future in significant ways.

There are a lot of high school athletes out there who are talented, but not very many of them take the time and effort to deeply study the history of their event. Set yourself apart by having a better understanding of the unique demands of your event, and then come up with a plan to train for it. Watch videos, read articles, go to college meets/games to talk with athletes/coaches. There is a lot of good information out there, you just need to go find it. (Of course, for the throwers Altis throws summer camp is a fantastic place to learn how to throw from former Olympians).

“Do everything you absolutely need to do in order to be successful, but nothing more.”

“Hard work beats talent, when talent doesn’t work hard.” Along the same lines as outsmarting your opponent with expert knowledge, there is no getting around the fact that finding success takes work. That being said, if you have good mentors and understand the nature of your event (i.e. advice #2) the work you do will be focused in the right direction and therefore more effective. The challenge for the young and often overly ambitious athlete is to find the balance between “minimum effective dose” and overtraining. Do everything you absolutely need to do in order to be successful, but nothing more. When you finally talk with the college coach, they will see that you are a hard working, intelligent athlete that has taken significant efforts to create success for yourself. These character qualities are very valuable to coaches … sometimes just as valuable as talent itself. Coaches want someone who will add character to the group as well as talent, so make sure that you invest in yours.

Nick – some great advice there, thank you. So final question – what is one book that all athletes should read?

I would suggest athletes read at least one book about Special Forces communities. We have a great deal to learn about courage, resilience, performance, and character from these individuals. The values they live by and promote transcend athletics and foster strong character qualities.

One of my recent favorites is “Lone Survivor” by Marcus Luttrell. His book is a first – a grueling account of what it is like to be confronted by a “no win” situation, and second – a window into the special bonds that are formed between team-mates in battle – insights to situations real warriors face may help athletes put the rigors of sport training and performance into perspective.