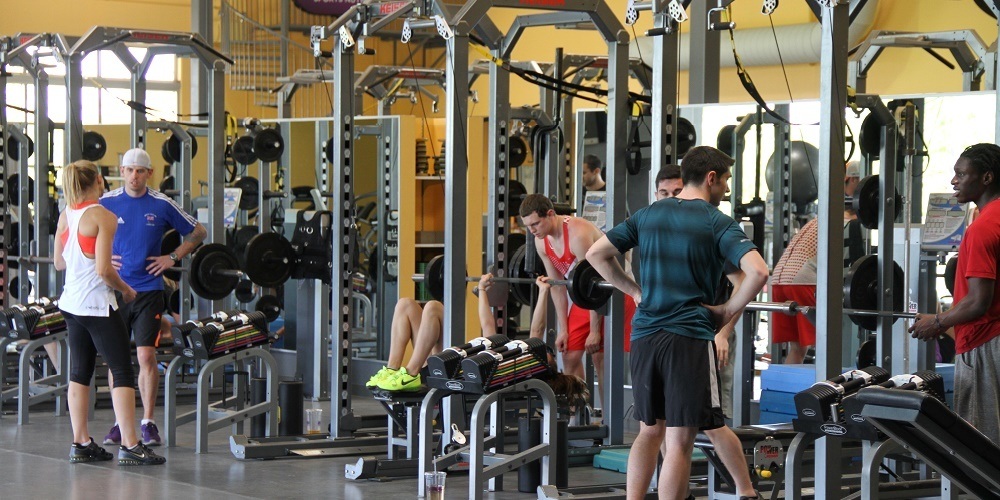 “Well, first week in Paradise Valley; the home of Altis to be precise.

First impressions can often be deceiving, but not here!!! The set up that John Godina (founder of the Altis) and the rest of the coaches Stuart McMillan, Dan Pfaff, Andreas Behm (to name only a few) have created, is without question one of the best learning environments for both coaches and athletes.

The track at Paradise Valley is an understated setting for such an elite group of coaches and athletes which I think actually helps create the focused working environment. Things change from modest to overwhelming when you head to Exos; one of the best and most modern gym facilities I have ever set foot in. Again, it is set up as a learning environment with classrooms, quiet recovery/chill out areas and its own (healthy food) restaurant! The equipment at Exos is mind blowing with items such as hydraulic squat machines that record peak power outputs (which got put to very good use one day by Aries Merritt and Stu McMillan as they had a “Power Off”! Aries won on this occasion but Stu has only been back in training a few weeks after his success coaching multiple medalists at the Winter Olympics … or at least, this was his defense for getting beaten!)

Having brought over quite a large group of athletes with varying abilities (9 in total, ranging from GB Internationals to junior and developing athletes) it was a little bit daunting in the beginning – but I quickly learnt I had nothing to worry about. The coaches offered me their entire programs within the first 24 hours of being here and said my athletes could join in with as much or as little as I felt appropriate; a model that we can learn a lot from … one where coaches are 100% open about their programming and actively work with other coaches to help develop the athletes they coach.

One of the most important things that I have learnt here in the first week is just how important therapy provision and athlete health is! The Altis has one full time therapist and an apprentice therapist 3 days a week. A chiropractor visits the track 3 times each week while Stu & Dan are never too far away from their therapy tables with athletes having treatment before, during and after workouts!

This is the first environment I have ever been in where everything feels 100% integrated; between the coaches, athletes and therapists … whilst also being fully inclusive of visiting groups!

I for one cannot wait for the next two weeks.”