Track and Field is Hard 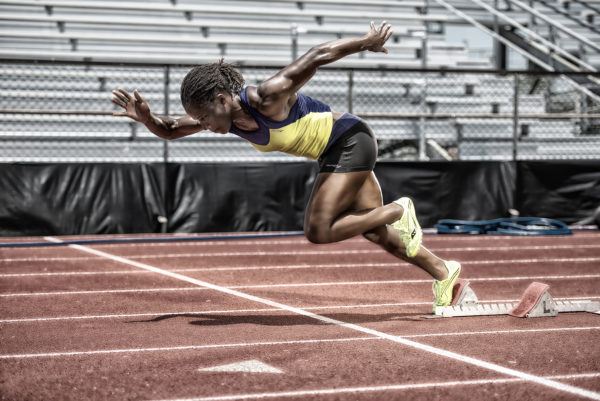 So you’re a college junior, and you are setting PRs every other weekend.

This track & field thing is easy!

While it may feel like that, a very high percentage of professional track & field athletes set their personal best performances while they are in college.  That’s right – most athletes are at their best when they are between 20-22 years old, and its all downhill from there!

As difficult as that may seem to believe, Dr. Ralph Mann – the USATF biomechanist – points out that of all the athletes who have performed at the IAAF ‘A’ standard while they are in college, only 20% of them are able to do so five years later.  We are currently doing a comprehensive statistical analysis to study this in further detail, and we estimate that the numbers will show this to be accurate.

And this is a problem.

Why is it, that during what should be the peak of an athlete’s career, we are not only not seeing performance progression, but an actual decline?  What is it about the professional track and field world that is leading to this drop-off?  And what can we do about it?

Through this series of articles, we will be highlighting some of the more pertinent challenges in the sport of track & field, specifically as they relate to transitioning from a collegiate career to that of being a professional.

We have enlisted four-time Olympian Lauryn Williams to help us with this series, who actually wrote the book on this: she released ‘The Oval Office’ in March of this past year – specifically geared towards collegians who are thinking of transitioning to a professional career.

We don’t think at this point, however, that the challenges have been well-established.

As a community, we do not do a good job of coming together and asking the hard questions: why so few athletes enjoy long and successful careers, and what the differences are between collegiate and professional programs – let along the larger issues within track and field globally, and our responsibilities in positively affecting this.

Lauryn offers her experiences and insight into many of the issues facing a professional track & field athletes in her book, and we encourage anyone who is thinking about track and field as a potential career to check it out – both athletes and coaches alike.

Following, we share a story Lauryn tells within the preface of her book, which nicely set up what was to come, as it will for the remainder of this series.

We hope you enjoy!

“In 2004, I was in my junior year of college, twenty years old and working my butt off to win the NCAA title in the 100m. I felt many times in the past that I was the best sprinter in the race, but somehow had never managed to make it to the finish line first.

Professional track and field was not an aspiration for me. All I wanted to do was win college nationals. When race day came, I was ready… and…I won. Not only did I win, but my time happened to be the second fastest time in the world that year. It was 2004, which was an Olympic year, and I was currently the fastest American woman. It was just weeks before the Olympic Trials. My life was about to change drastically. Shortly after nationals, my coach sat me down and explained that though it was her job to build a great university team, she wouldn’t be doing what was in my best interest if she didn’t explain the opportunity that was now available to me. Yes, I could stay in school another year, but I would be taking a chance. The choice was up to me and I had several things to consider:

• What if I get injured?

• What about my teammates? Am I ready to leave them behind?

After some reflection, I came to the conclusion that it was best to forego the remainder of my NCAA eligibility at the University of Miami and pursue my sports career. I was not old enough to drink or rent a car without paying an extra fee, but there I was making plans for a career as a professional athlete.

And so it started.

Time was of the essence and decisions needed to be made. I went from never really thinking about going pro to constantly pondering the best scenario. I could accept sponsorship money from a shoe company immediately which would have been the most conservative approach. I could wait to see how the Olympic Trials went. A good performance meant more bargaining power, but a poor one might damage the offer that was previously on the table. Maybe the smart decision would be for me to wait until after I made the team, and if I truly believed in myself I could wait until after the Olympic Games.

Each option presented an opportunity to negotiate, but the more time I allowed to pass, the more substantial the risk. Ultimately, I chose to become a professional right after the Olympic Trials which worked out well for me. I was fortunate (and grateful) to have my college coach to guide me through that process. Many young athletes are left to figure it out all alone. Some athletes’ parents are involved in the decision-making process, but mine were not. They cheered for me, but they didn’t have the slightest idea about the concept of going pro, going to the Olympics, making money from running, or having a career in track and field. They were focused on the free education! As long as that was achieved everything else was a bonus.

My story isn’t unusual in the sense that most people have no idea where to start when transitioning from college to the professional ranks. There is a steep learning curve for parents and athletes who are faced with this option. It is hard to prepare for, whether opportunity knocks in the middle or at the end of your college years.

The key to having a successful career will hinge on your ability to learn everything you can, build a team of people you can trust, and commit to figuring a lot out along the way. You are embarking on a journey that 95% of the population, including your teammates, will probably never have to consider.

During my career I learned many lessons; some were difficult to endure. However I had a successful career as a professional that lasted ten years. I made the IAAF World Championships team five times and earned five medals. I was on four Olympic teams and managed to become the first American woman to earn a medal in the Summer and Winter Olympics.

I also embarked on the journey of finding new passions and meaningful work outside of sports. I earned my Finance degree, got my master’s degree while competing, and then decided to become a Certified Financial Planner™ professional. I now run my own company where I help athletes organize their finances to make the most of their earnings. I love being part of their support team to help them make good choices.

I wish I had a resource to refer to while navigating the world of professional track and field to help me avoid some of the pitfalls I experienced. Track gave me so much to be thankful for and provided many skills I will use for the rest of my life. Though I am done competing, I want to continue to give back to the sport that has given so much to me. This book is my best effort at creating the “road map” I wish I would have had during my career. The objective advice you will find in these pages can be hard to obtain anywhere else. It is my pleasure to provide it and put it all in one place for you.

Welcome to the world of professional track and field.”