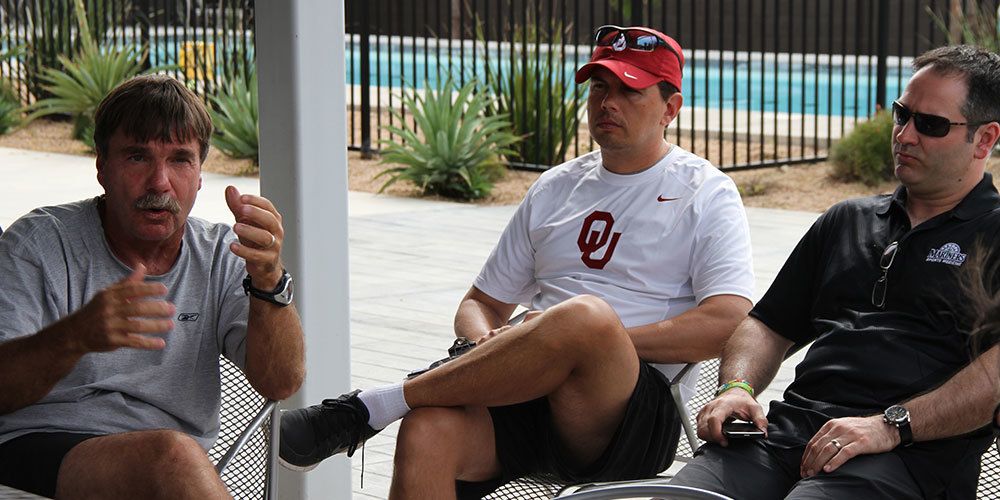 Since it’s 2013 inception, the Altis Apprentice Coach Program has continued to grow in popularity and acclaim – with next week seeing us welcome our fifth cohort of Apprentice Coaches onsite. In the mean time, we take a look back at the March Program in a Q&A with Apprentice Coach Neil Baroody, in which we discover what it was about the Altis experience that left him feeling “inspired.”

Neil, what is your background and how did you get involved in in coaching?

I am currently an Assistant Girl’s Track & Field coach at Londonderry High School in Londonderry, New Hampshire. As a former sprinter in High School and College, I became fascinated with the various dynamics associated with success in the sport of Track & Field. This prompted an interest in assisting others, as they work to solve their own unique puzzles.

What made you decide to apply to be part of the Altis Apprentice Coach Program?

What were you expecting from the Program, and did it meet those expectations?

I had high expectations prior to attending the Altis Apprentice Coach Program, but I was not completely sure what to expect. Although my fellow coaches and I were adequately prepared by the Altis staff, this was a different setting than previous conferences I have attended. Despite the fact that I have learned plenty at previous courses and have been fortunate to meet some awesome people through those events, the program at Altis was different as it not only served to develop and challenge the apprentice coach professionally, but also personally.

By being placed into the training environment, we were forced to engage ourselves and become actively involved in the training sessions. I quickly realized that it was easier to relate to the professionals at Altis, not only because we shared similar traits and characteristics, but also due to the fact that they all believed in something greater than themselves. The program was everything I expected and then some as the professionalism, respect, advice, and encouragement of the fellow coaches and the Altis staff prompted feelings of motivation and inspiration.

“The program at Altis not only served to develop and challenge the Apprentice Coach professionally, but also personally”

Can you talk us through a typical day onsite for you during your time at Altis?

During my time at Altis, a typical day onsite involved arriving at the track around 9:15am, upon which some of the coaches were setting up the facility for the upcoming training sessions. As the athletes began to assemble at the track, I had the opportunity to observe and engage with the therapists as they conducted their respective therapy sessions.

As the athletes began their warm-ups, I then took time to observe the movements and develop an idea of exercise assessments and benchmarks. Following the warm-up, I then made sure to not only spend my time observing the events I currently coach, but I also spent time at other disciplines with the hopes of learning something new.

After the training session at the track, I then traveled to EXOS (formerly Athletes Performance) and observed the respective weight training workouts. Once the weight training had concluded, the fellow Apprentice Coach Program coaches and I gathered for lunch and talked with Coach Dan Pfaff and other Altis coaches for a round table discussion, which concluded around 4:00pm.

Tell us about the atmosphere at Altis – how would you describe it?

The atmosphere at Altis was incredibly motivating and inspiring – one I looked forward to each day, as I never quite knew what was going to transpire. It was quite powerful to be in the midst of coaches, therapists, and athletes who shared similar goals and aspirations, while simultaneously treating each other with respect and appreciation. This was clearly evident through the profound attention to detail, and care each professional put forth over the course of the training week.

How does Altis program compare to others that you have been on?

Altis program was different than the other courses I have attended because we were actively involved in the training environment. As a coach, you never know what to expect and although we were provided with a daily schedule, the details of the itinerary were dependent on the adaptations of the athletes and the resulting coaching adjustments. The dynamics of the training week left me feeling refreshed and excited for each session and it’s components.

What is your biggest take home from your week onsite?

My biggest take home from the week onsite was the importance of creating a training environment that coincides with your coaching philosophy. While at Altis, I was able to see how powerful and successful a team of athletes, coaches, and therapists can be when they share common goals and visions. By observing the athletes engage with their coaches and teammates in an effort to provide feedback, it became evident that they were as invested in the process as their coaches and therapists. It was extremely powerful and inspiring to witness a shared passion and vision amongst all those involved. I would recommend the program to other coaches because it enables one to see what is possible when passionate and selfless individuals converge in an effort to improve the state of the sport of track and field.

For more information on our Apprentice Coach Program and how to apply, click here.