Excuses are the Nails that Build the House of Failure 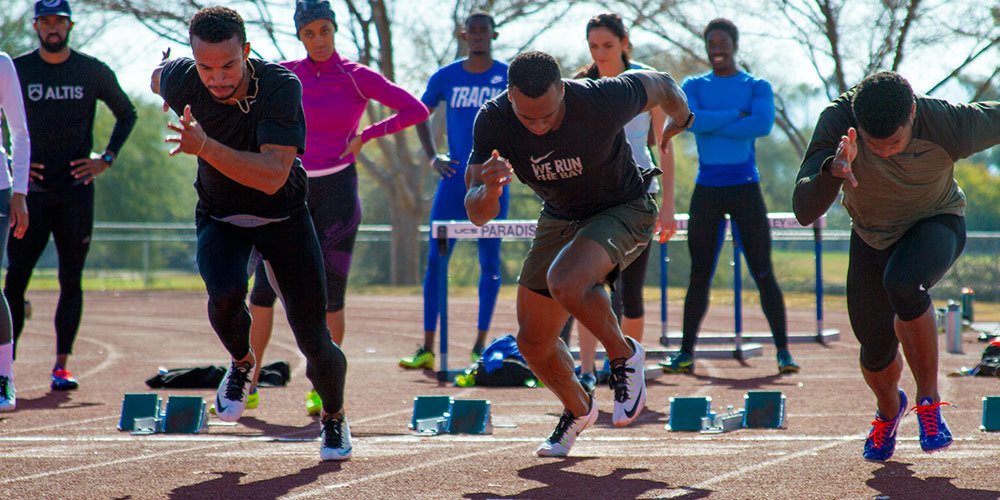 Formerly posted on Freelap USA, this week’s blog-post – written by Laurier Primeau – explores the value of learning, and the impact of experience.

As Track & Field coaches we’ve often heard that the best learning takes place not in formal educational settings, nor in coaching clinics; but in the opportunities one takes to sit down over a coffee with a coach who has demonstrated success at the highest level.  I’ve found this to be true.  While the quest for continual learning and reshaping of ideas through online research, classroom lectures, track-side observation and a myriad of other mediums is extremely valuable, I’ve gotten incredible nuggets of information that have shaped my philosophy, programming and relational approach by working up the courage to ask people with more experience than me to spend a few minutes over a beverage.  In many cases this has been Track & Field specific, but in others I have been able to solicit advice from people outside the world of athletics. The key for me has been to value learning, to understand that Track & Field coaches are not the experts in everything, and to find people who may have the information I want.

Kevin Tyler once described a coach that he knew by saying about him: “If he thinks you have a piece of knowledge that he wants, you’d better get a restraining order or acquiesce and meet up with him, because he’s going to harass you until you do”.  It is this commitment to learning that seems to be common among great coaches, and I’m sure that the now-famous ALTIS Pool-Side Chats were borne out of the recognition that being in an environment in which no question is too stupid – or irrelevant – facilitates an invaluable learning experience.

What follows is a short post referencing specific examples of meetings with people who know vastly more than me, and who’ve influenced my coaching through their wisdom.  These musings are not highly bio-technical, but rather emphatic on foundation and approach.

In 1997 I was on a charter bus between Phoenix and Flagstaff, Arizona, where Athletics Canada was putting on a series of sprint competitions.  I was still an athlete, but I had also been coaching since I was 21. When my high school coach suddenly passed I was asked to take over the team, so my interest in athlete development had been sparked when I was fairly young.  I found myself sitting in front of Charlie Francis on the bus, and a barrage of questions befell him.  Most meaningful to me was his riddle:

‘Q: What’s the difference between a personal trainer and a coach?

His point of course was that, if you are truly doing your job as a coach you are observing athletes in all of their movements.  If you are training beside them, your ability to provide technical feedback is so greatly reduced that everything is stunted – your athletes’ improvement curve, your ability to detect fatigue and make training adjustments, and your own observational skills.  One of a personal trainer’s primary roles is to motivate, and doing an exercise with a client can inspire ‘one more rep’.  However, coaches don’t find themselves trying to motivate great athletes very often because high-level competitors are so intrinsically wired that the role of inspirer is significantly limited.  The role of technical observer is paramount, and as such, my own focus on personal health has always taken place outside of the training session.

In a practical sense this has meant that I spend a lot more time at the track.  I can’t coach high jumpers at one end of the facility and long jumpers at the other simultaneously.  To give athletes the personalized attention they deserve and require, I’ve had to stagger practice times.  High jumpers come to the track at 12:00pm, javelin throwers at 1:30pm, long / triple jumpers at 3:00pm and sprints / hurdles at 5:00pm.  I have qualified coaches working the disciplines of circle throws, long sprints and endurance, largely operating under the same premise that individual training observations are foundational to detecting and implementing strategies for improvement.

Before moving to the United Kingdom to take on the Head Coach position for Scotland in 2009, I had an opportunity to visit with Mike Gillis, who was incredibly generous with his time.  Gillis had been in his post as General Manager of the Vancouver Canucks for about 18 months, and he told me a story about the two most prolific goal scorers that have ever donned a Canucks jersey.  In previous years and under a different staff it had been recognized that in relative terms the Sedin twins (Henrik and Daniel) were defensive liabilities.  It had been resolved that they would spend the off-season working on their defensive skills in order to plug that weakness.  The following season the Canucks had their lowest offensive production in years, and the Sedins’ defensive skills had improved only marginally.  The one thing they were good at – scoring goals – was significantly reduced so that they could get a little bit better on the defensive side of the puck.  Mike Gillis had a different approach – he felt that it was his job to figure out how to acquire and develop strong defensive players, but that the Sedins, who were natural goal scorers, should be left to focus on offensive output.  The following year the Canucks’ overall goals statistic improved significantly, and two seasons later they were in the Stanley Cup final.

This philosophy of allowing athletes to explore their strengths has been woven into the fabric of my coaching perspective.  My work with 400m runners is a good example of this.  With much talk in recent years about the merits of ‘short-to-long’ versus ‘long-to-short’, I’ve always taken the approach that the determination on programming should be athlete-dependent.  Specifically, with athletes who have good neural qualities and strong 200 meter times, I emphasize this in training prescriptions by hypothesizing that we want to get this performer as far down the track in 40 seconds as possible, and then tack on just enough specific / special endurance to get them across the finish line (which is congruent with a ‘short-to-long’ approach).  For athletes who do not have exceptional maximal velocities but who can hold on to the speed that they do have for a relatively long time, we engage a different tactic – one that begins at the outer reaches of the special endurance spectrum and gradually observes a reduction in load coming into the competitive period (it should be emphasized that even with this approach there is a good amount of front loading speed enroute to special and specific endurance repetitions within individual sessions).

This notion that an athlete is only as strong as the weakest link in the chain seems to be only partially true.  Of course there are limitations that can’t be ignored – mobility, minimum strength requirements, and tissue health among them.  But more often than not, my own observations have been that emphasizing the predominant training stimulus to parallel athlete strengths has led to greater performance improvements than a focus on what an athlete might not be as good at.

Excuses are the nails that build the house of failure

Paul Proznick is the Head of Physical Education at a prestigious boys’ school on the west side of Vancouver, and was my direct line manager in my teaching role at the school.  While he certainly did not coin the phrase, ‘Excuses are the nails that build the house of failure’, he’s taken the opportunity to overuse it.  But the simplicity in the message hits home – we can use energy to demonstrate why things are not possible, or we can figure out ways to make them work.  Paul talked about this idea with his basketball teams, his staff, and presumably at home.  Why couldn’t perceived soft, rich kids win basketball games?  Does wealth somehow limit one’s innate desires to succeed?  Why can’t I resonate with a ‘difficult’ student?  Had I tried creatively to connect, or was I giving up because it was easier to blame bad behavior on the pupil than use imaginative methods in dealing with the issue?

In Track & Field terms I’ve observed my mentors and colleagues produce incredible performers in sub-optimal environments.  It’s well-documented that Derek Evely has developed some of the world’s best athletes out of Kamloops, BC – a town of 85,000.  Shane Niemi (44.86 400 meters), Dylan Armstrong (22.21 shot put), and Gary Reed (1:43.68 800 meters) all hail from this small town in the interior of British Columbia, where winter temperatures reach -20 Celsius regularly and, when these three were growing up, there was no indoor facility.   While I’m sure that Derek would want me to emphasize that these athletes’ lifetime bests were all set after he moved them to other coaches, the fact remains that they were remarkable junior athletes under his tutelage.  Derek acquired an old World War II bunker, cleaned out the rat feces, hung nets, built a wooden throwing circle, and voila – an indoor shot put / hammer training facility.  It was still -20 degrees, but at least the implements didn’t get lost in the snow.  Next he brokered an arrangement with the City of Kamloops to use a 60-meter-long hallway above the local hockey rink.  This became his sprint straight, and at a balmy -5 Celsius he could focus on acceleration mechanics with his athletes all winter.

With a little ingenuity and a lot of elbow grease remarkable things can happen in training grounds that might be perceived as inadequate.  As I’ve transitioned into a new coaching role at the University of British Columbia and simultaneously developed the ALTIS Canada concept, I’ve found myself confronted with challenges – some facility, some budget, some staffing, and some climate.  But if Derek Evely can cultivate excellence in the face of much harsher odds on all of these fronts, surely Vancouver’s riches, the incredible training ground that is the University Endowment Lands, some good coaching and a little creative decision-making can go a long way to developing some of the nation’s – and indeed the world’s – best…

… After all – excuses are the nails that build the house of failure.