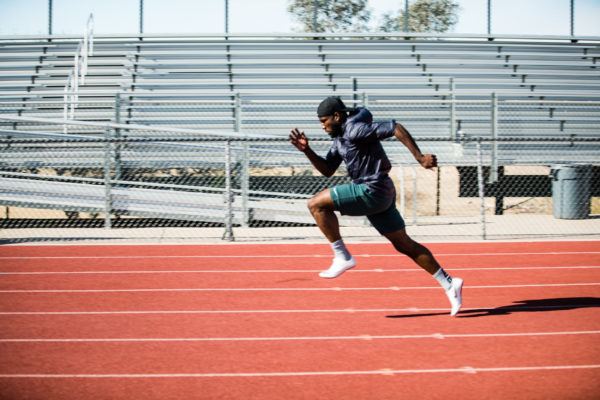 Do you think that you can tell how efficient an athlete is by watching them perform?

If you ask most people, Paula Radcliffe had a pretty inefficient running style.  Yet she has ran the fastest time of any female in history, in one of the most competitive events – the marathon.  In each of her 20,000 plus steps, Radcliffe nodded her head up and down and from side to side, her shoulders glued to her ears, and had a pronounced grimace on her face.

Do you think that if she had improved her technique she could have ran faster?

How about Jim Furyk?

Furyk holds the record for lowest round on the PGA Tour, has 17 Tour wins to his credit (including the 2003 US Open), and ranked in the top ten in the world for 16 straight years.

But his swing is super-funky!

Would you change it?

Assuming he could adjust his swing to a more ‘efficient’ one, would he have had even greater success?

Two-time World Series winner and four-time MLB All-Star Hunter Pence‘s swing has been described as looking like a “marionette that someone ran an electric charge through”.  After a disastrous 2018 season, Spence went about making some adjustments to his swing, and while it is still unique, it has led to a great comeback season – making the All-Star team this year for the first time in five years.

What would you have done if you were Pence?

Mess with a swing that had got you two World Series wins?

And then, once you do decide to tweak it, rather than chasing some ‘perfect’ model, you keep it just as strange as it was?

More generally, what is it about how these athletes perform their sports that makes them good – seemingly in spite of their mechanics?

Is it ‘efficiency’?  i.e. have they found a ‘more efficient’ way to solve the motor task they are presented with?

As an industry, however, we still tend to focus primarily on load / capacity.  And while we cannot ever totally separate these from efficiency, I will continue to argue that we obsess over one at the expense of the other – to the detriment of the health and performance of the athletes we work with.  At the elite level of sport, where load adaptations have generally reached a point of diminishing returns – efficiency is relatively more important than we give credit to.

** BTW – by ‘elite level’, I mean competitive collegiate and above.  Also please understand that this developmental pathway is a continuum.  There is no magic line where capacity stops being relevant, and efficiency takes over.  What I am saying is that capacity is relatively more important for improving a developing athlete, while efficiency is relatively more important for improving an elite athlete.

Load and capacity are relatively easy to identify, measure, monitor, and control.  Efficiency is none of these things.  In fact, ask 100 coaches what efficiency means to them, and you will no doubt get 100 different answers.

So perhaps we start there; an agreement on terminology.

First, as it relates to efficiency:

Mechanical efficiency is a well defined physiological term, and differs from ‘movement efficiency’ which doesn’t really mean anything at all – or means something different to everyone using it.  Words matter, and as an industry, we need to take better care that we are using the correct terms in the correct way.

We differentiate also between intramuscular ηnet and whole body ηnet.  While intramuscular ηnet seems to max out at about 30% (efficiency is lost through the process of the movement itself), there is no current consensus on whole body ηnet %, as it varies markedly between individuals, is dependent upon a far greater number of factors, is considerably more difficult to measure, and varies greatly depending upon the methods used to quantify mechanical work (Williams).  It is clear that whole body η is significantly smaller due to the additional cost of cellular, nervous system, circulation-ventilation, and stabilization functions, for example.   As well, mechanical efficiency is affected not only through physiological and biomechanical means; both psychological and biochemical factors can also contribute to the efficiency of performance.

You can see how we can get lost in the weeds pretty quickly here – so let’s back up somewhat.  (If you are interested, a classic series of papers by Cavanagh and Kram in the 1980s will give you a great primer into ‘efficiency’.)

What does ‘efficient’ currently mean to us during our practical reality of working with athletes?

Efficient movement generally looks smooth, or graceful.  Athletes who move efficiently generally make things look easy.  And often, their feedback after a particularly excellent performance will be “that felt so easy!”.  So – efficient movement looks easy, and feels easy.

But that doesn’t give us any sort of definition.

What about inefficient movement?

Ha!  But these athletes were (and still are) excellent athletes, who have enjoyed successful and sustainable careers.

And I think this is why we really need to ensure that we define – and use – our terminology in the correct way.

First of all, there really is no way for us to tell whether or not the manner in which Pence, Furyk, or Radcliffe movement was-is more efficient or not.  Because – as I alluded to last week – we still don’t really have a consensus of what efficient means – nor the means of measuring it.

This is not just a semantical exercise, as how we define these terms plays a big role in the work we do with athletes, and the manner in which we do it.

Before we dive too far down this rabbit hole, I wanted to share with you some of the thoughts of some friends and colleagues of mine.  Using the efficiency of movement as a starting point, I asked them – “As it relates to movement, What is the difference between correct, efficient, and optimal?”

There is definitely a lot of overlap in these definitions, but it just goes to show – that even within a pretty homogenous group of smart people working in the same industry, there is no agreed upon a priori understanding of these terms that we all use so often:

“As it relates to movement, What is the difference between correct, efficient, and optimal?”

“Efficient movement is defined by movement expression characteristics that improve performance and reduce metabolic and or structural costs.  Correct movement would be judged against a biomechanical model built out longitudinally with diverse populations and abilities to define bandwidth metrics for key markers.  Optimal movement is judged long term using the above mentioned guidelines and thought trains.”

“Efficient: costs the least. Correct: is a dream/not-real. Optimal: best result with respect to the overall goal.”

“Efficiency infers the valuation of the use of a form of currency (time, energy, force, effort); more efficient, less use of the currency. Correct infers that there is a wrong way and a right way. Optimal is relational to efficiency – most optimal would be more efficient; less optimal would be less efficient, but also aligns with context, ie this is a better way given the circumstance or environment.”

“Optimal movement lives within a spectrum with boundaries defined by the context of the task and the intrinsic characteristics of the athlete. Binary classification of movement as correct or incorrect is ill advised due to the wide range of solutions that may be appropriate for a given task. Movement efficiency is goal specific and is a ratio of the magnitude of the outcome measure (strength/power/speed/accuracy/endurance) desired divided by the allostatic load of each movement strategy (physiological, neuromechanical, biomechanical, neurocognitive, etc).”

“Efficient would be the one requiring the least energy resources while creating highest output in regards to task completion. Optimal movement is dependent on task and could be whatever completes the particular task but doesn’t mean it’s the most efficient. Correct is in the eyes of the beholder.”

“Correct is best used for a technical model; we identify correct with set ups and executions based on exercise , movement, locomotion – based on what historically produces safest and best results of X – whether it’s a clean, block start or push up.  Efficient could create a bigger picture of what’s happening – correct angles are happening but relaxation of the individual moving that allows someone to take greater advantage of the storage of elasticity, for example.  Just because I have hit “correct” positions doesn’t mean I necessarily did so in the most efficient manner.  There is a rhythm and timing that also needs to accompany the positions to be efficient.  Optimal could be as it relates to a given individual, with specific needs or based on environmental constraints – running or COD on a wet surfaces may not allow said athlete to execute what may be “correct” – so it’s a bandwidth of sorts based on individual and occasion.  I think specific needs is where this term maybe is more appropriate – e.g. injured athlete or with a prosthetic – their optimal is now within or outside of current “correct” movement bandwidths but is optimal for them.”

What do you think about the above?

Anyone way off base?

What did you come up with?

If you’re like me, you had the most trouble with ‘optimal’.

‘Correct’ is also a little tricky.  While ‘efficient’ is actually pretty well-defined already – even though as an industry we tend to throw the term around a little too loosely.

Of course, all of these terms – how we use them, and how they relate to human movement – are often contextual.  As my friend James Fitzgerald said in his reply, the difference between efficient, correct and optimal is ‘the reason’  – i.e. the structure and the function.