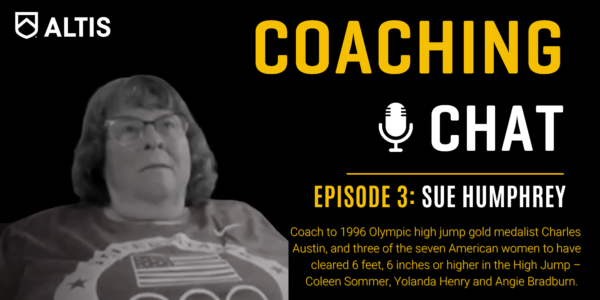 Welcome to Coaching Chat, an ALTIS vodcast series where Education Director – Ellie Kormis – chats with coaches, coach educators, and teachers who coach – from High School coaches, to Pro coaches, to new coaches, to the seasoned warhorses of our profession.

Episode 3 sees us joined by Coach Sue Humphrey – a High Jump Coach from the USA, who boasts a tremendous coaching biography, and offers a wealth of experience to share from for the benefit of others. A brief highlight list of her achievements include:

In this 23-minute chat Sue discusses:

If you want to connect with Sue and chat further, check out her social media accounts: