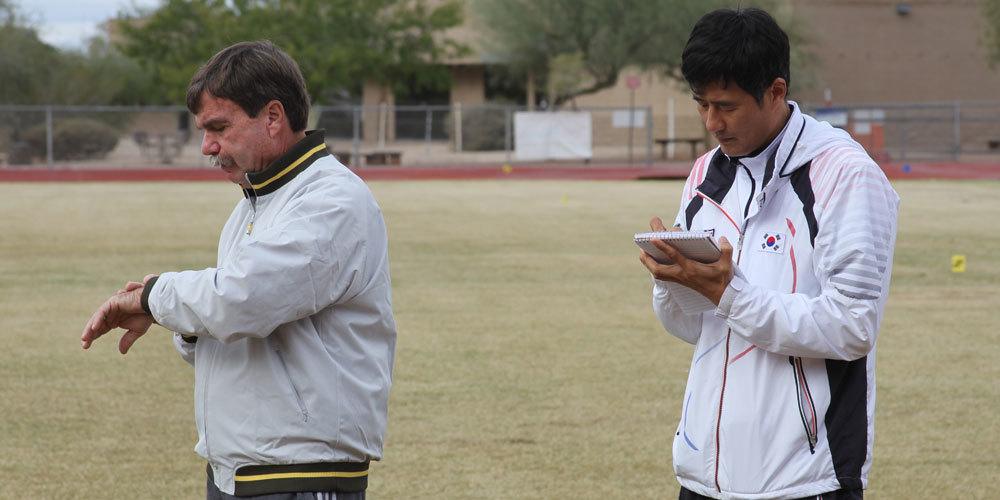 Coach Pfaff is one of the top Track & Field Coaches in the world. In addition to having tutored 5 World Record holders, 49 Olympians to nine medals, and 51 World Championship competitors to nine medals, Dan has directed athletes to 57 National Records across a multitude of sports.

In 2013, following a highly successful period working in the UK, where he was instrumental in bringing home two gold medals for Team GB in the 2012 Games, Coach Pfaff returned home to the United States where he was appointed Education Director & Head Jumps Coach at Altis.

An expert across multiple domains and events in Sport & Sports Therapy, Dan is a Coach-Educator operating at the highest level. Widely acclaimed for his memorizing coaching and teaching style, Coach Pfaff not only actively coaches at a World Class level, but is a celebrated speaker on the international circuit having lectured in 27 countries and published in over 20 countries. Those who have been fortunate enough to spend time with Dan will testify to his highly sophisticated teaching & mentoring skillsets – enhanced by his natural empathy towards others. A teacher in the truest of senses, Dan’s expertise in the art of pedagogy is second to none, and his humble generosity in sharing his knowledge is something that has touched thousands.

In this interview, Coach Pfaff provides insights into his background into coaching, his thoughts on teaching, mentoring & learning and his roles at Altis – as well as insights into future plans for developing the already successful Coach Education Programs.

Dan, can you explain how you started your coaching career?
I started out as a high school science teacher and a coach to a lot of different sport disciplines like wrestling, basketball, American football, track and field, baseball … so a pretty broad background. I was teaching all of the sciences and coaching a lot of sports.

Who were the people who had the most influence on you as a developing coach?
I had a high school football coach who was a generalist and a universalist and treated athletes with respect instead of the military format, so he was the first guy who got me thinking about coaching. Tom Tellez was a huge mentor – the coach of Carl Lewis, and then I would say Victor Lopez, Loren Seagrave, Gary Winkler – guys like that who I grew up with would be the next – and to be honest there are dozens of mentors that I’m probably remiss not acknowledging.

What do you remember as the key take homes from your own mentors that you still apply today?
They were very systematic, very logical, fairly integrated, and had very strong trial and error motifs. They were all very, very good teachers, and all had a lot of compassion and empathy for the athletes they worked with.

You are known for your expertise as a mentor – how many people do you currently, and have you helped?
I probably actively mentor a couple of dozen coaches, probably another 100 to 150 periodically. I would say the same thing on the side of sports therapies and sports medicine practitioners.

Why do you mentor, and what do you learn from it?
You learn subjects best when you have to teach them, so if you’re constantly teaching then you’re constantly growing in depth of understanding, and I just think that so many people have reached out and helped me over time that it’s only natural that you pay back and share the wealth. I’m a big believer that if you smother knowledge it dies – mentoring makes you dig deeper into your subject matter and into teaching and the art of pedagogy. I’m also fortunate that I’ve crossed a lot of countries and continents, so you really have to learn what works when you have to coach in a language where they don’t speak your language – you figure out real quick if you can coach or not.

What is the most commonly asked question that you get asked by the people you mentor?
I think it falls into several areas. Programming would be the first part – too many young coaches try to fit too many things on the menu, and don’t know how to order the menu. Then I would say sports medicine & sports injury questions, and then it evolves down into technical factors and motor behaviour factors from there.

What is the most common mistake you see inexperienced coaches make?
I would say first and foremost that they don’t identify the key performance indicators for their event group or their athletes. So consequently they may be painting in too broad a palette for that stage of development, or overloading that athlete for that stage of development – because they haven’t truly identified what absolutely needs to be coached and developed versus what’s nice to be coached and developed.

So moving onto your position at Altis – could you explain what your roles are there?
I have a lot of hats that I wear at the Center. I lead the Coaching Education formats for Phase 1 and Phase 2, and the Apprentice Coach Program – in fact our biggest coach impetus at the moment is the Apprentice Coach Program and it’s off to a good start with numbers pretty high; I coach some individual athletes, and I am the Event Coach for jumps and combined events.

I also co-ordinate sports medicine delivery, as well as the sports medicine network – both here and abroad – as our athletes travel. I do a lot of coaching of visiting athletes (we have contracts with Shanghai and Korea, so they come over for long stints). We are also hosting a growing number of training camps, so I’m a co-ordinator and a liaison, and sometimes part time coach for those groups who come to here for warm weather training.

The Apprentice Coach Program has had outstanding feedback so far which is a testament to its efficacy. Why do you feel it is so important for coaches to have that hands on experience trackside with you, rather than being in a classroom?
I think with modern technology, modern course offerings and internet course offerings, coaches today are swimming in knowledge, but lacking in practical mastery – the craft of teaching – the art of teaching – and I don’t know that you can easily teach the art of teaching online or at a weekend course. I think there’s no substitute to standing behind a coach exhibiting best practice and best skills.

In terms of Altis Coach Education Program plans – moving forward what will be available in the future?
We have some event areas where it’s not logistically sound to do longer courses, so we are in the process of developing some internet webinars. We are also up and running with all the Phase 1 courses, so now we are working to seamlessly merge these into the Phase 2 courses.

For coaches interested in coming to Altis on the Apprentice Coach Program, what would be your take home advice in terms of preparation?
I think they should come with big areas of interest and questions that they have – so in debriefs these can be answered. Come open minded and try to capture the process and the art of teaching rather than the numbers and the X’s and O’s.