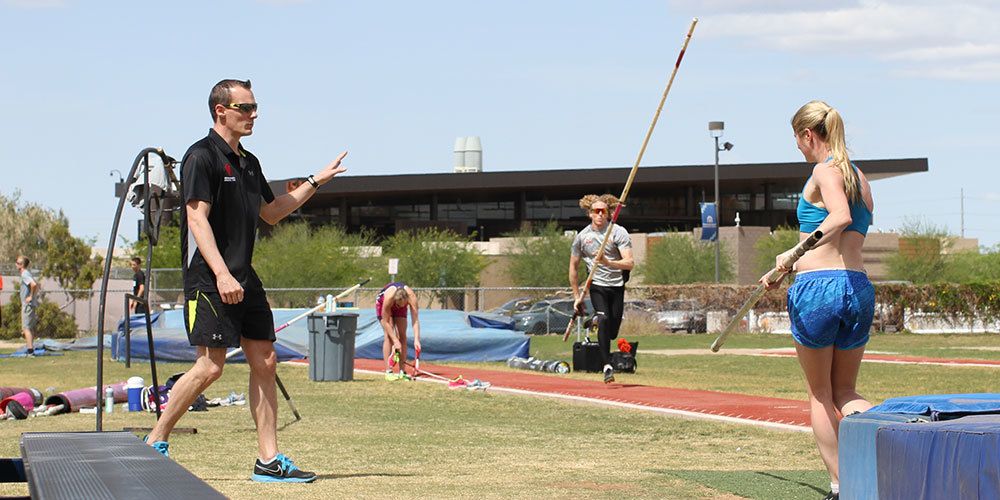 As part of Altis’ partnership with Welsh Athletics, we have been welcoming groups of athletes & coaches from Wales onsite for training camps for the past 6 months.

Having just said goodbye to our final group prior to them commencing their final tuning for the Commonwealth Games in July, we sat down with National Performance Coach – Scott Simpson for an update on Welsh preparations, and to learn more about his background and coaching philosophy.

Scott, thanks for taking the time to do this. Let’s start at the beginning, tell us about your background in terms of sport & education – what route did it take?

I was very sporting as a youngster – participating in Gymnastics, Swimming and Martial Arts. It provided me with a great foundation for years to come. I started Athletics aged 13 and was involved in sprints and combined events as a teenager. I found success as a Pole Vaulter much later in my career, winning my first National medal in 2001 when I won the UK U23 title. My career highlights included captaining the GB U23 team, representing Wales at the 2006 Commonwealth Games, placing 2nd at the 2004 and 2008 Olympic Trials and setting a Welsh National Indoor Record of 5.42m in 2007. I studied at the University of Wales Institute, Cardiff (UWIC – now Cardiff Metropolitan University) and was awarded a 1st class honours degree in Sport and Exercise Science in 2003. I then started my PhD in Sports Biomechanics (triple jump) in 2005, but sadly this remains incomplete.

So how and when did you start coaching?

My first experience in coaching of any sort was in 2001 when I was instrumental in setting up the Junior Academy of Athletics at UWIC, where I then held the role of head coach for 3 years…this gave me a great foundation of teaching athletic skills to young athletes in all events. I was then appointed to the role of pole vault coach for the University in 2003.

Who have been the biggest influences on your coaching career to date, and what have been their stand out messages?

It depends on the area; pole vault technique, training theory, coaching philosophy etc. Previous coaches are always hugely influential – Tim Snowdon, Dave Lease and Steve Rippon being the main ones for me. Since I’ve started coaching, Dan Pfaff has been someone I liaise with regularly on all areas and more recently, others from Altis staff including Stu McMillan who has an amazing mind and great insight in a number of areas. Injury prevention has been my big thing recently and those who have impacted on me in this area include Benke Blomkvist and Steve Fudge. The best advice I can offer that encapsulates what I’ve learned is to keep people healthy, be adaptable and flexible in your approach and continue in the strive to constantly be better.

What makes a great Coach from your perspective?

It is definitely in the balance between the scientist and the artist. There are many coaches who understand the science of training theory, the mechanics of the event and have the knowledge of many sports science disciplines – but they lack the creativity to apply it effectively and the inter-personal skills to get the very best out of their athletes. Similarly, there are those who are highly imaginative and have a natural instinct for what they are doing – plus they have the ability to inspire and motivate their athletes – they however, often lack any scientific principles on which to base their judgements and without those, often come up short. The greatest coaches are those who find the right blend of the two – which is something rare, but not unattainable – it is no different to the concept we apply when developing an athlete – maximize your strengths and minimize your weaknesses.

“Maximize your strengths and minimize your weaknesses.”

So moving onto your current role as National Performance Coach with Welsh Athletics – can you tell us more about this & what it involves?

My job title is the National Performance Coach, but effectively I am the Performance Director for athletics in Wales. My ultimate aim is to ensure success at the Commonwealth Games. However there is a lot that goes into ensuring success at Championship level, so I have many responsibilities within that – from coach development to athlete management, from creating the performance strategy to managing the performance team, from liaising with stakeholders to coordinating sports science and medicine inputs – I could go on!

For those people who are not familiar with the Commonwealth Games and what that means to home country athletes, could you outline the importance of the Games and the amount of focus that Wales places on this?

It is only at the Commonwealth Games where athletes get the chance to represent their home country (rather than Great Britain) and therefore the only Championship event where Wales is showcased to the world. Wales is a patriotic nation of only 3 million population and with a huge sporting heritage. There is no doubt that when athletes pull on the Welsh vest that the pride that goes with it is immense – and that is a pleasure to behold.

From a more political standpoint – the Welsh Assembly puts a lot of investment into performance sport as part of its elite sport strategy – encapsulated perfectly in its slogan; “producing a nation of champions”. It is very important that Welsh Athletics uses this investment wisely in pursuit of its own goals that ultimately contribute to this overall vision for Sport in Wales.

Moving onto the ongoing partnership that Welsh Athletics has with us here at Altis – can you explain what this has involved and how this has supported the preparations for the Games?

This has been the first year that this partnership has been in place. It has been a great start. It began with a visit to Wales by Altis staff; John Godina (CEO and Throws Coach), Stuart McMillan (Performance Director and Sprints Coach) and Andreas Behm (Recruitment Director and Sprints and Hurdles Coach) who delivered a fantastic day’s coach education in Cardiff followed by an athlete clinic the following day in Swansea.

Since then, 5 cohorts of coach-athlete groups have made visits to Altis in Phoenix. This comprised 1 coach and 3 athletes on each occasion – each based on clusters of athlete on Welsh Athletics support programmes and coaches who are coaching athletes at that level. All of this has been invaluable in the preparation of both the athletes and the coaches for the Games in Glasgow in 2014.

And from your perspective, how successful has this partnership been so far and what has the feedback been like from coaches and athletes?

Like I said, it’s been a great start. The feedback on the visit of Altis staff to Wales was amazing – they truly inspired athletes and coaches alike. It’s funny – you can say something to people every day for a four year cycle – but when you stand the coach of the World Record holder in front of them for just one day and he says the exact same thing – it hits with 100 times the impact!

Final question Scott – as a relatively young National Performance Coach, and having held some stand out roles so far, could you pass on some advice for other ambitious coaches hoping to work in performance sport … what do they need to do and what should they focus on?

Great question. I gave a presentation to final year under-graduate students last year and they asked me to present on the same topic again this year – it was fundamentally based around the same question – what are the lessons I’ve learned so far that have allowed me to be successful. It came down to the following five key points:

1. Do something you believe in and that you enjoy – this will provide you with endless motivation.

2. Commit to what you do fully – work hard, be conscientious and do as good a job as you possibly can – there are no short cuts to success.

3. Surround yourself with good people and network with purpose – there is so much information in other people’s minds, you just have to go and get it.

4. Always bring high energy and positivity to every task on each day – it will bring out the best in you and in others.

5. Don’t be afraid … to speak to people… to take a risk… to try and to fail… to go one more round – whatever your fear, it can be overcome if you believe it enough.