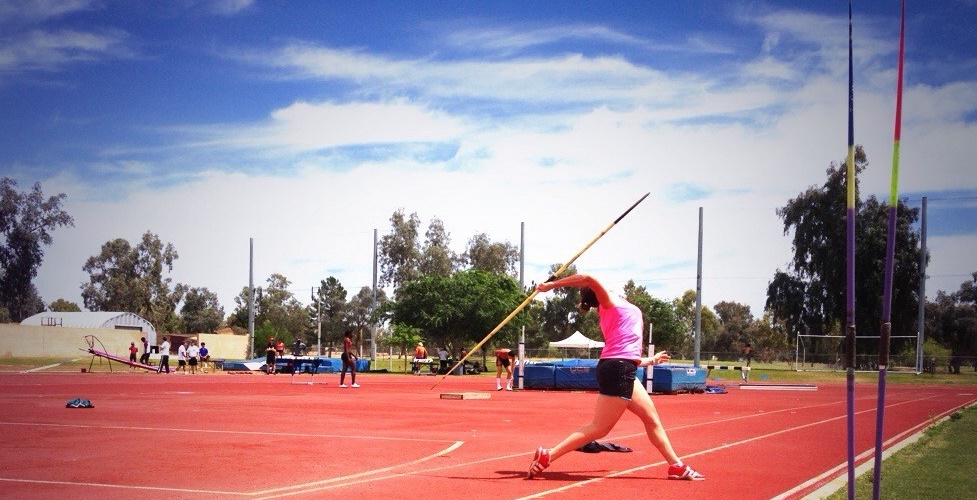 Three-time Olympian, World & European Championship finalist, and UK Champion for the past ten years – Goldie Sayers is a stand out performer in the Javelin, and one of the most experienced competitors in the world.

2012 promised to be a golden year for Sayers. However, minutes after a phenomenal British Record breaking throw of 66.17m at the London Grand Prix in the lead up to the Olympics, misfortune struck … Goldie sustained a serious injury in her final throw of the competition. She had torn a ligament in her elbow. An injury which ultimately destroyed her chances of making the Olympic final, and bettering the 4th place finish she achieved in the 2008 Beijing Games.

Following a difficult year in 2013 which saw the 31 year old undergo reconstructive elbow surgery, Goldie is now back throwing – and all sights are now firmly set on making her country proud – at what will be her fourth Olympic Games in 2016.

Goldie has recently been based at Altis for an extended camp working under the watchful eye of Altis Team, including the Coach who worked with her in London leading up to the 2012 games – Dan Pfaff. In this short chat with Goldie, we talk about her thoughts on competition, training, and her views on Altis.

Goldie, thanks for joining us. We’re going to move around between a couple of different topics here, but let’s start with competition and the London Games …

Can you talk us through your pre competition routine on the day of a meet?

Depending on the time of day, I tend to rest more during the day but may stretch my legs so as not to be too lethargic. I will also have a power nap if time permits. I will have a big breakfast which would be protein based and a smaller pre meet meal around two hours before the start of competition. I always do the same warm up so I know how my body feels and know what may need more work. I do drills and some dynamic flexibility, two 20m sprints and some ball throws before call up. If it is a major championship then I would also throw javelins (8-12 throws) as you only get two warm up throws before the competition begins. My warm up would last 30-40 minutes.

What key messages did you learn from working with Coach Pfaff and McMillan in the build up to the Games?

I learned a huge amount from Dan both on and off the track. He is a master of mechanics and is great at problem solving. One of his greatest skills is getting athletes back from injuries safely but very quickly. He did this with me several times. He is great in a crisis and takes a lot of the worry out of injuries as he always knows the best course of action. He reduces the physical losses that can occur from injuries as he is very good at modifying exercises so that the nervous system is always being stimulated. This then reduces the ‘training gap’ that can occur during lay offs. Dan’s programs are very methodical and there are always key sessions that you can gauge how you’re doing. There isn’t huge changes throughout the year in terms of sessions and exercises so that the body isn’t constantly overloaded. Being a perfectionist (like most athletes), Dan taught me that sometimes it’s Ok to be Ok. In addition, Stu taught me a lot about performance nutrition.

“I learned a huge amount from Dan both on and off the track. He is a master of mechanics and is great at problem solving” Goldie Sayers

Can you tell us what pressures an athlete faces building up to a home championships / Games, and your advice for best dealing with them?

There can be a lot more ‘noise’ surrounding a home games. However, if it is planned for, this extra excitement can aid a good performance. I personally love the pride and sense of anticipation that a home games gives the public and I try and feed off that.

So, what in your view, are the 3 most important factors that drive successful performance?

And from your own career, what commonalities can you identify in terms of mindset that went hand in hand with your best performances?

Complete trust in my technique, total focus on the process and on myself. Relaxed aggression and belief.

Moving onto Altis – tell us about your thoughts on training here – how have you found it?

Altis is a very relaxed environment where everyone is working side by side in order to improve – whether they are a coach or an athlete. It is the only place I’ve been where the coaches ask as many questions of the athletes as the athletes do of the coaches. There is great camaraderie and a family atmosphere whether you are staying for three weeks or three months. Often training on my own, there are always people to join in with on certain sessions or a coach to cast an eye over something you are working on. One of the greatest things about Altis are that therapists on hand trackside. One of the strangest things in track and field can be that therapists are always tucked away in a treatment room whilst you are training or competing so they never get to see you actually do your discipline. This doesn’t happen at Altis so the therapists know what you are trying to achieve mechanically and technically by watching trackside and communicating with coaches. It also helps that many of the coaches treat too. The weather is also as close to perfect as I’ve ever experienced!

Final question for the Junior Athletes reading this – if you could give some advice to yourself as an 18 year old athlete, knowing what you know now, what would you say?

Listen to your body, embrace your uniqueness and always focus on your strengths not your weaknesses. You are MUCH better than you think!

Goldie – thanks very much for your thoughts, and best of luck for the season ahead!