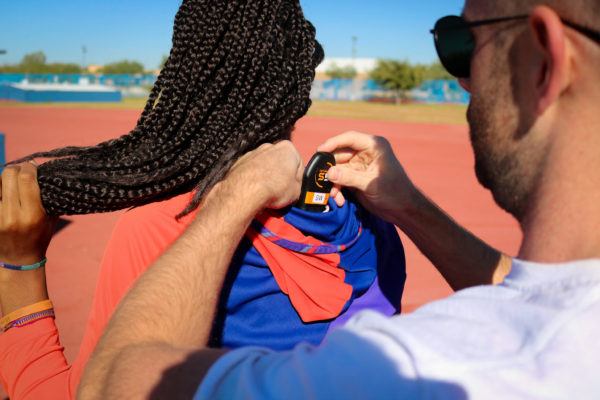 Training load monitoring has been common practice in endurance and team sports for quite some time (Foster, 2001). The terms external and internal load have been used to describe the two primary ways in which training load is categorized (Impellizzeri, 2019). The external load is the physical work that the athlete performs – not necessarily what was prescribed by the coach or in the training plan, but the physical output that was actually carried out, which may frequently differ due to on-the-spot, real-time modifications. In fact, Mujika (2017) has described three distinct external loads: “the load planned before the season starts, the load prescribed on a daily basis, and the actual load completed by each individual athlete.” As coaches it is sometimes assumed that we already have the external load recorded within our training plans, but it is also unknown how often (or not) the plan is carried out as scripted. One method by which external load can be objectively measured is wearable global positioning (GPS) technology, which can quantify metrics related to running velocities and distance traveled (among other, accelerometer-based load measures) (Cummins, 2013; Scott, 2016; Vanrenterghem, 2017). However, simple methods such as training diaries (ratings of perceived exertions [RPE]) and weight training volume-load can also be useful when budget prohibits GPS application.

The internal load describes the response elicited by the external load. This is the physiological load incurred during the training, but can also be measured through indicators of the psycho-physiological load experienced as a result of training. While it’s important to first describe the training prescription (external load), it is imperative that it does not stop there, or get fixated in over-analyzing these metrics. After all, “it is the internal load rather than the external load, which ultimately determines the functional outcome of training” (Impellizzeri, 2019) and furthermore, the inter and intra-individual internal response to external load can differ greatly (Thorpe, 2015). Internal load, especially in endurance sports, has been traditionally described by measures such as heart rate and blood lactate concentration. However, subjective measures like ratings of perceived exertion (RPE) and daily wellness questionnaires (also used as a response-to-load measure) have been shown to be useful in a wide-range of activities and are very practical and easily applied strategies (Foster, 2001; Saw, 2015; Thorpe, 2015; Haddad, 2017).

While extensive information exists regarding training practices and monitoring strategies in endurance and team sports (McLaren, 2018; Bourdon, 2017; Mujika, 2017), there has been very little work in this area related to elite sprinting (Haugen, 2019). In fact, it appears there may only be three published papers to date that have investigated load monitoring in elite sprinters (Suzuki, 2006; Jiménez-Reyes, 2016; Cristina-Souza, 2019).

Cristina-Souza et al. (2019) recently used session RPE-TRIMP (training impulse) during a training camp to compare load, training monotony, and strain in national and international competition level hammer/discus throwers, middle and long-distance runners, and sprinters/jumpers. Their primary findings suggest that while training impulse was similar between the three groups (runners, throwers, sprinters/jumpers), training monotony and strain was highest in the runners. A very simple study, though, similar/more work is needed to understand training load and responses over the course of a training year in elite sprinters.

Suzuki et al. (2006) is an example of how training load can be tracked and utilized to improve training planning over the course of a season. In this case study, the authors investigated the use of RPE-TRIMP and other simple objective and subjective measures (morning resting HR, category ratio pain scale, total quality recovery scale) to monitor training load, fatigue, and recovery and to predict performance in an elite Japanese 400m sprinter. This work illustrated that these simple measures were sensitive enough to largely predict perceived performance, as shown in the figure below (r2 = 0.83, p < 0.001):

Whilst these findings are interesting… “what is the point?” Or “why is there a need for more research on training load monitoring as it relates to elite sprinting?” Mujika (2017) states a rationale well: “It is simply not possible to identify the effects of training without a precise quantification of the training load.” Without objective measures of the work that an athlete performs and how they respond to that work, training modifications from cycle to cycle or year to year would continue to be based on assumptions and best guesses. This would make it difficult for coaches to be confident that their training decisions have had a positive impact. If there is no measure of what athletes are doing/performing and how they are responding, how coaches/support staff be sure our training modifications from year to year, or even cycle to cycle, are appropriate?

The overarching purpose of training load monitoring is to enhance decision making throughout the training process. In elite sport, and especially elite sprinting, where it is perceived that very small margins are meaningful, knowledge of appropriate means for monitoring training can have a considerable impact (Hopkins, 2005; Bourdon, 2017; Haugen, 2018). This information can provide coaches with a better overview of the process surrounding the athlete, allowing them to adjust programming on a short or long-term basis, with the ultimate goal of improving performance.

Mujika, I. (2017). Quantification of training and competition loads in endurance sports: methods and applications. International Journal of Sports Physiology and Performance, 12(s2), S2-9.