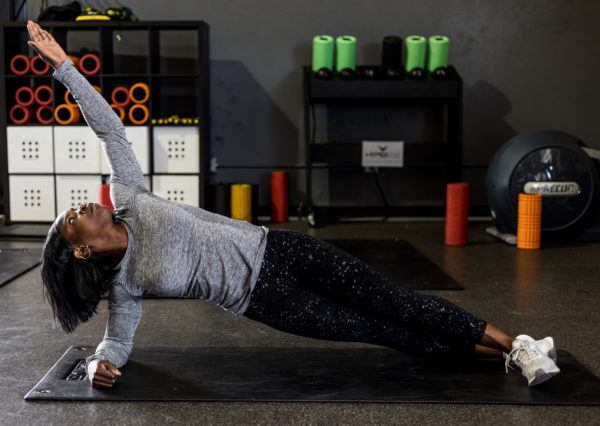 ‘Structural integrity’ refers to the synergistic capacity of musculoskeletal (MSK) chains to operate in balance for effective force transfer and movement efficiency.

‘Structural tolerance’ refers to the capacity of tendons, ligaments and joints to withstand a progressive increase in physical training and muscle work. It is the ability of these tissues to resist fatigue and injury. This capacity is essential for athletes.

The exercise selection listed below includes both multi-joint and single joint movements. The typical repetition range is 8 to 15, with 1-2 sets used during in-season competition and 2-4 sets for preparatory training periods. As the overall neural and metabolic demands are low, interset rest intervals are low as well (i.e. between 60-90s).

As the A-March ISO is a structural tolerance exercise, the length of the isometric contraction can be held anywhere from 3-30 seconds. It is imperative that the athlete remain on the forefoot of the stance leg, and be able to maintain a high thigh block on the swing leg, during the entirety of the isometric contraction. When transitioning from one leg to the other, the athlete should position the lower leg such that they have full foot contacts on the ground and ensure the swing leg remains in a high block until the opposite leg replaces this position.

Emphasis should be placed on the set up position for this exercise. Ensure that the athlete’s hips are in a position such that they are located slightly ahead of the hip pad of the Glute-Ham Raise machine. This will promote more posterior chain activation and will limit over-dominance of the lumbar spine erectors. When loading the posterior chain, the coach can utilize barbells, dumbbells, or kettlebells. The coach also has the ability to stress the posterior chain in a bilateral or unilateral fashion by manipulating foot placement.

Tension during this exercise should be felt in the distal hamstring group. To ensure we are biassing an isometric contraction in this area, maintaining the correct posture and position during the exercise is crucial. In the tall-kneeling start position, the athlete’s hips should be in a neutral position; look for large amounts of anterior or posterior pelvic tilts as they will act as compensatory strategies. Once in the start position, a plumb line should be able to bisect the athletes ear, shoulder, hip, and knee. The hamstring will start to engage once the band is brought to eye level but be aware of any changes to the plumb line. During this phase of the exercise it is also common for the athlete to counterbalance the band, rather than maintaining a contraction, by lifting the toes of the ground and creating a “see-saw” motion with their knees being the fulcrum. To address this make sure you cue the athlete to push their toes into the ground.

Prior to utilizing this exercise, the athlete should be comfortable with executing a side bridge. We want to ensure that the elbow is placed directly under the shoulder, and that the athlete is able to utilize the posterior fascial sling by activating the latissimus dorsi. During the exercise, ensure the hips remain in a position where they are slightly forward and above the shoulder. Both the bottom and top feet should aim to “squeeze” the foam roller as they engage the isometric contraction. As this exercise stresses the adductor complex, the coach should progress both hold times and the number of reps/sets the athlete does.

The use of KB’s during this exercise can be replaced by dumbbells if need be. During the Farmer Walk and Suitcase Carry components of this series, ensure that the athlete is actively pushing the Kettlebell down to the ground and do not allow any side bending to occur. This will help us recruit a reflexive contraction of the rotator cuff during the exercise. Likewise, when executing the Waiter’s Carry component of the series ensure the athlete is actively pushing the Kettlebell towards the sky and that the upper arm remains vertical to the horizon. It should be noted that the incorporated dribble walk should be done in a circular, rather than elliptical, motion.

The initial setup for this exercise should be no stress to the athlete. We want to ensure the ipsilateral knee and elbow, on the raised side, remain in the same plane of motion for the entirety of this exercise. Likewise, the shoulder and knee of the planted arm should move around the same plane at all times. At no point should there be a disassociation of the upper and lower body which can be seen when the hips start to rotate away from the rib cage.

At the bottom position of the exercise, ensure that athlete has an adequate hip hinge and that the arms are posterior to the hips. Common faults in this position are too much knee bend and a rounding of the low back. At the top position of the exercise, the athlete should demonstrate a multi-segment extension pattern in which there is a slight extension of the spine, shoulders being positioned slightly behind the scapula, and the anterior superior iliac spine of the pelvis slightly ahead of the midfoot. Transition from the bottom to top position should occur with an impulse which moves the athlete from flexion to extension; likewise, moving from the top position to the bottom position occurring with an impulse which moves the athlete from extension to flexion. Between these impulses the athlete should be relaxed and let the momentum of the impulse create the desired movement.

This exercise is used not only to create structural tolerance of the Glenohumeral joint, but to also teach the athlete how to disassociate the shoulder girdle from the neck and thoracic spine. It accomplishes this by allowing the weighted arm to act as a fixed point on which the thorax will rotate. The starting position for this exercise is akin to that of the traditional Turkish Getup with one leg in a hooked-lying position while the other is straight. The hook-lying leg will initiate the movement diagonally across the body. As the lower body starts to rotate, ensure the weighted arm remains in vertically oriented position. It is a common fault to see the athlete start to sway the vertical arm from one side to another. Encourage them to push their knuckles to the ceiling if this occurs. Once the athlete has transitioned into a side-lying position, have them move the weighted arm into internal and external rotation.

The subjective difficulty of this exercise can be modulated by increasing or decreasing the length of the TRX straps. Once an ideal length of the straps is determined, ensure the athlete creates a 45 degree angle to the horizon with their body. It is not uncommon to have the athlete rock back onto their heels to accomplish this, however they may also start to extend the low back which is something that should be avoided. During each variation of the exercise have the athlete assume a “packed” shoulder position which will ensure adequate shoulder stability during the entirety of the exercise.

The use of a Valslide for this exercise is optional, but is recommended until the athlete develops the coordination to complete the exercise without it. During the exercise, ensure the athlete is hinging at the hips to his/her full extent. It is common to see an athlete move into excessive spinal flexion as a compensatory strategy – both this, and excessive extension should be avoided. Instead, the athlete should be able to maintain an erect, posturally sound, spinal position throughout the movement.

During this exercise, ensure the pelvis remains as level as possible as the the athlete starts to descend. Common compensations for adequate gluteal control include a lateral listing of the spine away from the descending leg or the athlete may try to hike the hip of the descending leg. The overall movement of this exercise should be smooth and controlled, watch for athletes who rapidly drop their leg to the ground as this is indicative of poor articular control.

Have the athlete remain in an upright torso position for the entirety of this exercise. Poor posture, which includes rounding of shoulders and excessive posterior pelvic tilting, will skew the intent of the exercise away from the lower limb. As the athlete initiates the movement, ensure they are rolling on their foot starting from the toes and progressing to the heel. It is a common fault to see the athlete collapse inwards at the knee; ensure they are painting relative abduction to help prevent this valgus collapse.

As this exercise looks to build on the stability of the upper quadrant, maintaining the correct postures during its execution is crucial. In the start position, ensure the scapulae are protracted but that the athlete remains in an upright position. Flexing at the thoracic spine to accomplish this position is a common error. As the athlete executes the exercise, ensure they are pulling the straps such that the tips of their elbows travel posterior to the shoulder.

ONE ARM, ONE LEG DUMBELL PRESS

This structural integrity exercise looks to build on the force transfer from the lower limb to the upper, and vice versa, via the frontal fascial sling. During the exercise ensure that the athlete is not flexing their head as this will lead to unnecessary strain. As the athlete pushes the dumbbell, be aware of any shifting of the pelvis toward the weighted arm. This is a common fault as the athlete will look to stabilize the weight with a change in center of mass rather than utilizing core control.

Have the athlete start in a front plank position while their feet are elevated via the TRX. In this position is it crucial to ensure the lumbar spine remains in a neutral orientation. As the athlete starts to shift their hips posteriorly, ensure there is no deviation from the original neutral spine position. Common faults include anteriorly rotating the pelvis to act as a passive stabilizer of the spine.

Reading: The razor curl: a functional approach to hamstring training

Reading: Muscle activation of the torso during the modified razor curl hamstring exercise