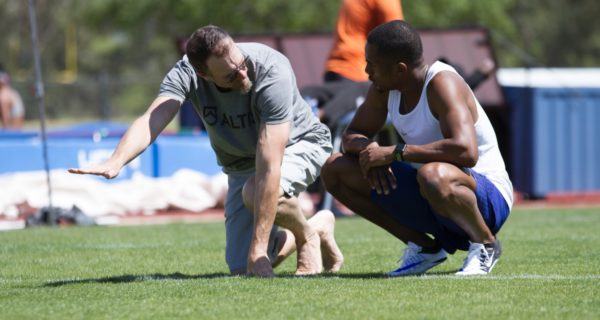 At the end of part II, I asked the question:

“Is the goal for the athlete to drag her toe, or is it for her to have an effective and efficient block clearance and initial acceleration”?

This may sound like an obvious question – you’re probably thinking to yourself “well, of course the purpose of the start is to get out as fast as you can!”, but is it really?

The fact is, that we would employ a totally different technical model if the task was a 10m sprint, and not a 100m sprint.

Too many coaches and athletes lose sight of this, and place too much focus on the wrong metrics – the most common one being the ‘start’.

How would you answer the following question:

If you were asked to guess the finishing places of a 100m race, and the only information you had available to you was either 0-30m times or 60-90m times, which metric would you use?  Which metric correlates more-accurately with a 100m?

The reality is – in the 100m – the primary KPI (i.e. the most important factor) is maximum velocity.  The athlete who is fastest from 60-90m will almost always win.

There are, of course, exceptions to this. Certain athletes are such superior starters, and are so clear of the field going into the 60-90m zone, that the other competitors simply cannot catch up.  We saw this with Christian Coleman at last year’s World Championships, for example. This occurrence is even more frequent at the developmental level.

The problem is we don’t see this situation as an outlier.  Rather, we see Christian Coleman’s start, we see him win the race, we correctly equate the two, and then – incorrectly – apply this correlation broadly across our own population of athletes.

Far more frequently, we will see the 100m winner ‘come from behind’.

Many of us have been guilty of thinking the following about a successful sprinter who is generally not known as a ‘fast’; starter: “boy, if only ___ could improve his start; imagine how fast he would be!”  We heard this line of reasoning with Carl Lewis, with Donovan Bailey, and with Usain Bolt – and we even hear it today with a few of the fastest sprinters on the planet.

And of course – all things being equal – if any of these athletes improved their start, then they would have ran faster.  But all things are never equal. Nothing exists within a vacuum. If an athlete improves his start, top speed might be reached at an earlier point in the race, and deceleration could occur sooner. In this scenario, modifications to the early part of the race would actually have a negative effect on the latter part of the race (i.e. earlier maximum velocity and elongated deceleration phase).  Coach Dan Pfaff has communicated this to hundreds of athletes and young coaches over the years as “you can’t rob Peter to pay Paul”, meaning – “sure – you might be able to get to 30 faster but how do you think you’re doing that?  You’re going to pay for it later in the race!”

That is not to say, by the way, that Bolt – or anyone else, for that matter – was ‘holding back’ during the initial part of the race.  The 100m race is full effort the entire time. So what changes then, if it is not effort?

In a word – mechanics.

Without getting too stuck in the weeds here, an athlete’s mechanics are governed by the confluence of two sets of factors: internal and external.

Differences in structural constraints are often obvious to the eye – such as height, weight, strength, mobility, etc.  These are generally easily identifiable, and therefore, we can intuitively understand the need for different technical models for different athletes – especially between athletes with major structural differences.

Usain Bolt is sprinting as fast as he can for the first 30m of a race – but because of his height (and other internal factors), it takes him longer to fold and unfold his limbs, so he takes longer on the ground, and in the air, than someone like Christian Coleman.  Coleman is also sprinting as fast as he can, but because of his shorter limbs, his inherent faster stride frequency (in addition to other internal factors, such as his ability to produce high amounts of force very quickly), he covers this distance faster than his competitors.

While it may be obvious to us that Usain Bolt and Christian Coleman produce different techniques, it is perhaps not as obvious for seemingly more similar athletes. For example, Tyson Gay and Christian Coleman are both elite sprinters, with similar body types, but express their ability in very different ways. Coleman is the best starter in history. Gay was a notoriously slow starter.

Less obvious internal factors include such things as length-tension relationships, differences in fibre type, fibre pennation angles, fascial organization, neuro-chemical make-up, etc.; and while they are not as easy to identify, they still play an important role in what technique is ‘available’ to an athlete, and thus what the eventual movement will look like.

Some of these factors are modifiable to some degree.  Many are not – and this is where things can become challenging when coaches attempt to change, tweak, or refine technique, and why we simply cannot apply a generic technical model for all athletes.

If you have a tall, rangy, elastic sprinter and you attempt to apply a shuffling, low-recovery toe-drag start, then you are simply not taking advantage of the specific gifts this athlete has available to him.

Again – this is fairly obvious to most of us.

But, what if the athlete wasn’t tall and rangy? What if he looked like Tyson Gay?

Just because Tyson Gay is similar in stature to Christian Coleman, does it mean he should be starting the same way?  If so, why? If not, why not?

Only once we know the answers to these questions, can we can finally go about devising an appropriate technical model.

I will go into that a little in part IV.