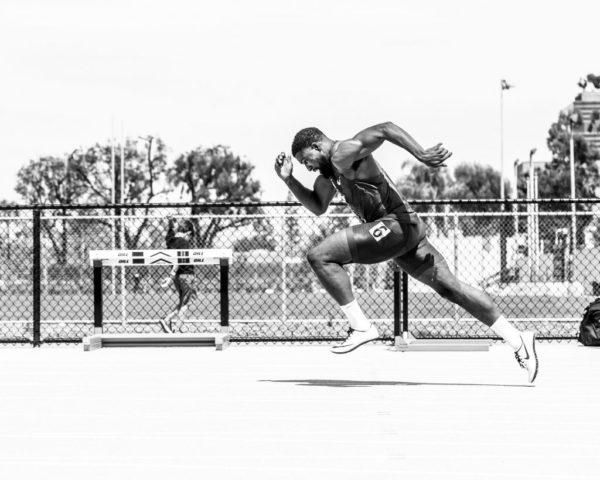 Thanks for coming back.

In part I, I offered my thoughts on why the ‘toe-drag’ is not the be-all / end-all it is often made out to be, and in fact, a practice I would discourage in almost all instances. To promote  ‘low heel recovery’ is often offered as the reason why coaches instruct athletes to drag their toes – perhaps using ‘dragging the toe’ as a corrective ‘over-cue’ for an excessively cyclical initial acceleration.

I hope, after reading, part I, that you understand that this is not how I would address this issue; and in this second part, I will introduce the framework through which I go about making technical changes with the athletes I work with – and thus the decision-making process of how to affect block clearance and initial acceleration. It is therefore a little heavy on the process, so I totally understand if you want to skip it, and just wait for the nuts and bolts in part III, where I will describe in much greater detail, how I go about coaching this particular part of the race.

You may have seen the Simon Sinek TED Talk ‘Start with Why’. It is the most-watched TED Talk in history, with almost 50million views since its release in 2009.  If you haven’t seen it, check it out here:

What has this talk – meant primarily for business leaders – got to do with dragging your toe, you ask?

Well – actually, quite a lot.  Let me explain:

Sinek’s primary take-home message is “people don’t buy what you do; they buy why you do it.”  He feels that the most-successful businesses are those that have a clear sense of purpose – their ‘why’; while less-successful businesses start with their ‘what’, and therefore have difficulty inspiring both their employees and their customers to care about what it is they do.

Similarly, whenever we look to implement a technical change with an athlete, it is imperative we begin with asking why we are looking to do it.  The alternative is haphazardly throwing things at the wall, with the hopes that something will eventually stick.  This is not coaching. Or at least, it is not good coaching.

When it comes to coaching, however, this is somewhat incomplete.

It is useful to me to think of movement as a dynamic, and iterative, interaction between a ‘problem’ and a ‘solution’ to that problem.  In this case, the athlete has the ‘problem’ of accelerating out of the blocks in the most effective and efficient manner possible. The resultant movement is the athlete’s ‘solution’ to that problem, which in turn presents another problem (i.e. the next step); the relationship between problem and solution is reciprocal – if one changes, so does the other.

Between problem and solution exists a functional, adaptive relationship between the athlete, the environment, and the athlete’s perception, action, and intention – i.e. when, where, how, and why the movement takes place.  It is only through this level of contextual analysis where we can fully understand, and influence, the ultimate solution – the movement.

“who is this athlete; where and when is she confronted with this problem, why is she doing what she does, how can we influence her to either do that better – or do something different”, and finally “what is the resultant movement?”

Finally, in order for the athlete to most-effectively go through this process, we must communicate the problem as a ‘goal’.  This ‘goal-directed’ notion was first introduced in the early 1960s by Russian biomechanist Nikolai Bernstein, who discussed the importance of ‘goal-direction action’ and ‘desired future’ – the idea that goals drive actions; and that actions are driven by a desired future state.

“When a bird builds its nest, its actions are goal-directed; the bird doesn’t move to and fro without a plan. It appears to be guided by something akin to a plan, or a goal to which its actions are leading. A predatory fish hunting for its prey, the actions of a monkey climbing a tree, the flight of an insect to a flower it needs, etc., all these and countless other examples are goal-directed actions.”

How do Bernstein’s words here influence how we communicate the technical objectives of a desired movement?  Again I ask:

“Is the goal for the athlete to drag her toe, or is it for her to have an effective and efficient block clearance and initial acceleration”?

More to come in part III.

Our Team has grown! – Meet Aasha and Tameka